The Tarleton campus in Stephenville will likely be losing one of its parking lots but will gain a new college and a new building to house it. The applied science building will cost around $54 million and will be the home of the future College of Engineering and Engineering Technology. It will take some time to put together full construction, but the end result will be worth it for the students. It is not known as of yet which companies they will be using for the new build, but commercial concrete services will be one of the first to lay the foundation.

With the rapid growth Tarleton has experienced in the last few years, university officials believe expanding the infrastructure of the university is now necessary. This is evident by the numerous new residence halls being built near the student center. However, classroom space remains limited.

“We have not received any state funding since 2007 to build a new building. That’s a long time to go between building any academic facilities,” said Harry Battson, the assistant vice president of marketing and communication. “The growth that we’ve had has been privately financed residence halls and renovation money that allowed us to renovate the O.A. Grant building in order to meet the needs of some of our liberal arts and fine arts 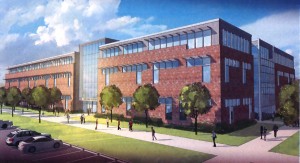 Above is a computer generated illustration of the predicted final structure of the future applied sciences building.
Photo Courtesy of Tarleton Media Relations

The building itself will be somewhat of a teaching tool as well. In the building’s initial conception, the idea was presented to leave many of the structural and plumbing elements visible to the students inside to learn from.

“The university has grown alot,” Battson said. “We’re one of the fastest growing universities in the state. We’ve gone from having 6,000 to more than 8,500 students on the main campus enrolled last fall. This fall will probably top that. To meet that growth, we really need alot more academic spaces we can use. Laboratory space has been a critical need for some time.”

Tarleton has seen tremendous growth and is now going to receive the means to facilitate that growth. The funding will not only allow for the science center to be built but also ensures that it will be equipped with the best possible resources to help students. From small things like lab equipment labels, all the way up to innovative equipment that can be used for future research, the building will benefit future students greatly.

“We will not have anything on the scope that Texas A&M has,” said Dr. James Pierce, the dean of the college of science and technology. “They’re much larger than we are, and their programs are much larger. But we are planning on a building that will meet our current needs as well as our growth needs.”

“For our department, we have [the Engineering Technology building], and we have our downstairs building that was built in 1954,” said Dr. George Mollick, the department head of engineering technology. “It’s had a couple of foundation jobs done to it, because the foundation’s given way a few times. The roof is iffy. There’s no air conditioning. We got the last miles out of that building about 10 years ago. We’re running on fumes.”

Even if the program stayed the size that it is, the facilities have slowly deteriorated over the decades, leading to the new building to be not only beneficial but, according to university officials, also necessary in the continuance of the program itself.

The earliest construction will begin is the summer of 2016 and will not be completed until the fall of 2018 at the earliest. The official location has not been decided yet, but the possible locations are anywhere between Bender and Ferguson Halls and Diary Queen or anywhere between the library and the Engineering Technology building. However, the only open spaces between Diary Queen and Bender and Ferguson halls are faculty parking lot P11 and commuter parking lot P30. The only open space between the library and the Engineering Technology building is faculty parking lot P15.