The current patrol officer at Tarleton State University, Clell Murray, is running in the 2016 election for Erath County’s new sheriff. Murray is a 1979 graduate of Highland High School in Roscoe and has been a hard manual-labor-worker for the majority of his life.

“I have flipped hamburgers and worked a service truck, fixing flats on everything from bicycles to huge dirt movers,” said Murray.

He also worked jobs selling guns and archery equipment and working in a factory building telephone cables. That all came to a halt in 1989 while working on a 3,600 pair cable. Murray quickly found himself out of a job after injuring his back, which required him to have surgery.

Post back surgery, spring of 1990, Murray enrolled at Tarleton to pursue a degree in criminal justice to become a probation officer.

“It was time to do something that required more brain and less brawn,” said Murray.

His professors found ways to make class bearable enough for Murray to sit through while suffering from back pain.

“During my first semester, I had a lot of pain and could not sit up longer than 30 minutes at a time. The instructors allowed me to lie on the floor at the back of the class so I could attend the whole class,” said Murray.

While enrolled in probation courses, he realized his true interest was in criminal justice. The second semester was significantly better for Murray after he began his required physical education course and beginners swimming class. 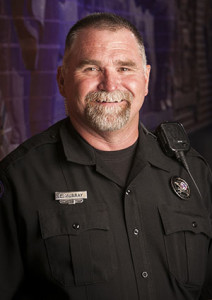 “That swim class changed my life,” said Murray. “I became healthy enough to enroll in Tarleton’s Police Academy, which I graduated second in the class.”

“I actually worked undercover here on campus and at the local bars, but I needed to get a paying job,” Murray said.

Two months later, in the September of 1991, Tarleton Police Department hired Murray as a patrol officer. Home life required Murray to reduce the hours he attended a semester to only 3.

Murray has spent his entire post police academy career at Tarleton, other than one year he spent in Iraq to be a bomb dog handler.

Until 2013, Murray did not have the ability to devote any time to enroll in college again. After getting passed up for a promotion due to the lack of a degree, Murray then kicked it back into gear and finished his degree.

It wasn’t until Murray’s 19th year working for Tarleton that he considered running for sheriff.

“I was asked to think about it and it just grew into desire to help this community,” said Murray.

He finally decided to run for sheriff after hearing discussion from locals about how some things need to be handled differently or even followed up on, including numerous other personnel issues in the sheriff’s office.

“I have reached as far as I can go here at Tarleton… My retirement eligibility is falling just right. I can run for office and then retire after the election,” said Murray.

According to Murray, a few changes will be made if he is to become county sheriff. Murray plans on working on training and connections with the community.

“I intend to patrol with and assist the deputies in the issues that occur to determine what specialized training would be of benefit to them and the county we serve, ensuring we are utilizing our personnel and resources to what will best help the community,” said Murray.

He plans on auditing and reviewing the policies in the jail and for the deputies for what is the considered the industry’s best practices for every department.

“There are good people at the sheriff’s department and jail, and with some training and assistance, it can only get better,” said Murray.

The current Erath County sheriff, Tommy Bryant, has served for nearly 20 years as sheriff and will also be running in the March 2016 election against Murray.

“The main difference between the current sheriff [Tommy Bryant] and I is training, leadership skills and style. By looking at the training I have been fortunate to receive while here at Tarleton and the experience earned while working over in Baghdad, Iraq, I honestly believe that I can make the Erath County’s Sheriff Department and jail a better place for the community and the employees,” said Murray.