Editor’s note: The location of the Ring Ceremony has been moved from the Thompson center to the Clyde H. Wells fine arts auditorium.

On April 14, students with 60 or more hours will gather to receive their class rings.

Before students receive their rings, the president of the Alumni Association Todd Searcy, class of 1985, will talk about what the symbols on the ring means. Searcy was one of the designers of the ring when he was attending Tarleton. 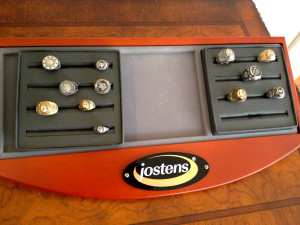 After giving a short overview of the ring, Searcy then presents the ring to the student as their name is called. The student walks across the stage, accepts the ring and then is congratulated by President Dominic Dottavio.

They sign the ledger of the rings, which is a journal denoting their ring number. They are told how to properly wear the ring as they put it on.

People can come back to the alumni association, where the journal is kept, to see what their ring number was if they were to ever lose the ring. 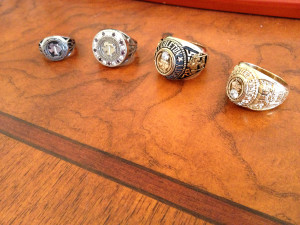 “It really is the second most important ceremony that students will attend while they are here on campus, it being the second to graduation,” said Bonnie Peterson, Tarleton Alumni Association executive director.

The official Tarleton ring started in 1985-1986. James Douglas was the student president at the time when the ring design was first started.

Alumna Bailey Searcy, a December 2012 graduate, gave a student perspective of what to expect during the ceremony.

Searcy said she would encourage all to attend the ring ceremony because it is worth going to. It’s like a pre-graduation. She said that it is “a bigger deal once you graduate.”

Searcy worked for the Alumni Association while attending Tarleton. While working there, she said she has seen an increase in students within the past two years attending the ceremony. She wants to see the ring ceremony become more of a tradition at Tarleton like it is at other universities.

Searcy said that the same time she got her ring, her dad, Mr. Searcy, was presented his class ring as well.

The ring ceremony will be held Sunday, April 14, in the Thompson Student Center Ballroom and will start at 2 p.m.