The process of Tarleton becoming a Division I university has officially begun. Tarleton President F. Dominic Dottavio, and Athletic Director Lonn Reisman are doing all the preparation they can through a self-study, should Tarleton receive an invitation to join the Southland Conference in the 2015-2016 academic year and become a part of NCAA Division I athletics.

“This is one of the biggest decisions in the history of Tarleton State University,” said Reisman, “but I think it’s more than a Tarleton decision. It’s a decision for Tarleton, the Stephenville community, the alumni, and the Texan Club. There are a lot of entities that go into why Tarleton should go Division I, and it involves a multitude of people.

“[Going Division I] is going to put us out there on things such as ESPN and give us opportunities to market our athletic teams on television and give us more media coverage,” said Reisman. “It brings a level of visibility that we do not get at the NCAA Division II level.” 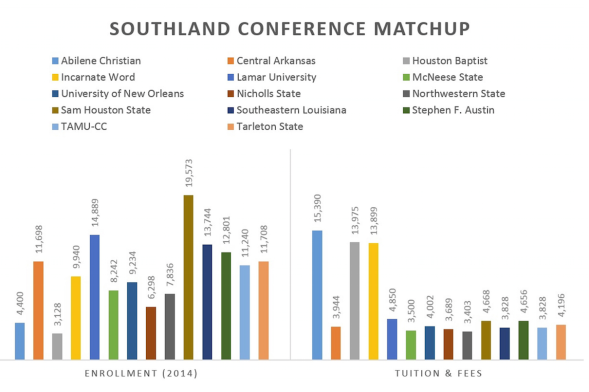 Tarleton would rank fifth in enrollment numbers and eighth in tuition costs if it were in the Southland Conference right now. (Information from Southland.org)
(Graphic by Harley Brown, Texan News Service)

“We have conducted a very thorough analysis of our sports program, how our facilities align with other Division I universities and a variety things like that,” said Dottavio. “If we received a bid from Division I, I believe we would have adequate documentation of where we are relative to other universities.”

If approved, Tarleton would then go through the four-year probationary period. During this period, the NCAA would monitor Tarleton and make sure it is meeting the eligibility and recruitment rules for Division I.

A large downfall for schools in the probationary period is that they are unable to compete for any championships. This could affect Tarleton tremendously. In the last year, Tarleton’s men’s basketball team won the Lone Star Conference while making it to the Final Four in the NCAA Division II tournament. The volleyball team won the Lone Star Conference Tournament for the first time in school history, while the women’s golf team captured the NCAA Division II Super Region IV golf championship. Tarleton’s softball team won the NCAA South Central 1 Regional Tournament, and both men and women in outdoor track captured national titles.

“I visited with schools who went through similar transitions, and some of them have seen the probationary period affect their recruiting and some of them haven’t seen it affect them,” said Reisman. “I think you’re going to see some players who want to come play Division I anyways. You’re going to see some who say, ‘If I can’t play for any championships, I’d rather play at the DII level.’ I think it’s going to be back-and-forth. It’s hard to predict that.”

Reisman believes that Tarleton will be prepared to compete at the Division I level after the probationary period. As a Division II school, Tarleton has defeated Division I teams in both football and basketball. “I see Tarleton competing in the Southland Conference by the fourth year as an athletic program that can contend for conference championships and NCAA tournament berths,” he said.

Reisman explained, “We are looking at a budget that can put us in Division I and make us competitive in our conference and then get outside of the conference and pull some upsets in NCAA tournament championships.”

The Southland Conference is made up of 13 schools with three schools in their probationary period. With the current schools in the Southland Conference, including Stephen F. Austin State University, Sam Houston State University and former Lone Star Conference rival Abilene Christian University, not partaking in the probationary period, Tarleton would have the fifth highest enrollment of students for the 2014-2015 year (11,708) and the eighth highest tuition and fees ($4,196).

Becoming Division I goes beyond just sports. The movement to Division I will help raise the academic profile for Tarleton while improving the marketing and branding.

“Consequently, while raising the academic profile of Tarleton, it makes the Tarleton degree that much more powerful for the students and future employers,” said Dottavio.

Reisman agrees with Dottavio’s point of view. “I’ve been told by other people, including our consultant, that it means a lot to people to graduate with a Division I diploma,” said Reisman. “Our faculty and staff here is just as outstanding as schools at the Division I level, and they deserve that same notoriety and visibility, too. People see things as you’re either Division I or Division II in everything you do, because that’s how it’s portrayed in the media.”

Tarleton is currently in need of approximately $4 million to reach the average athletic budget in the Southland Conference. Dottavio said he is hopeful to find the funding for this without raising tuition or fees for the students in the near future, keeping Tarleton as affordable as possible.

“The primary ways that we would have to look at having enough dollars to make it feasible would be through growth, and Tarleton is rapidly growing,” said Dottavio. “With growth comes additional What normally happens when universities do go to Division I, they do see an increase in donations into the athletic program. Our expectation would be that in addition to having to deal with what we have internally, we would hope that we would get some external funding increases as well.”

Reisman stressed the importance about funding being a huge commitment.

“You’re going to get major gifts and fundraising, along with the Texan Club that continues to raise money for our athletic program. But the university has to make a commitment that they want to reallocate money towards athletics from the university. If you want to be Division I—be Division .”