The Tarleton State University Science Planetarium remodeling project is now complete and will have a grand opening this fall semester. Stephenville can now explore the ocean depths, view the Milky Way galaxy and journey on many other adventures more clearly than ever through the screen of the newly remodeled planetarium on campus. Planetariums are one of the most fascinating aspects of a scientific education, and now you can even have them in your own home thanks to planetarium projectors. They’re a fantastic way to learn all about the earth as we know it, and could lead to some amazing new discoveries. 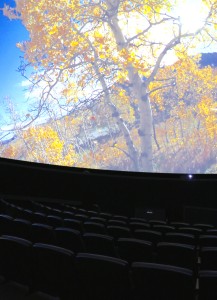 The screen of the planetarium is curved, and the seats recline further than the seats of a typical movie theatre.
Photo by Keauno Perez

With university funding, the Science Planetarium has been completely remodeled. Dr. Shaukat Goderya, the director of the astronomy program, said, “The $700,000 renovation includes the state-of-the-art equipment in full dome theater video and sound technology, which is available in the market today, and new, more comfortable seats and other improvements to make the viewing experience more enjoyable for our audience.”

Goderya also said that “the full dome theaters are very different from normal cinema theaters. While it can play normal films and videos meant for flat screen [but is projected on a curve dome] its own specially-produced content and shows are designed to wrap around the inside of the curved dome at very high resolution for more realistic and amazing digital cinema experience.”

In the planetarium before, the projector was in the middle of the room, very large and taking up seating space. Now that it has been removed, a control center has been added to the back of the room, allowing an audience of 86, compared to its past maximum of 56.

Goderya explained the reason for installing a control room by saying, “The control room houses all the instruments required to run the planetarium, including the nine high-power, high-precision graphics computers it takes to operate the planetarium.”

Before, the planetarium was restricted by its equipment when it came to the types of shows and activities it could produce. 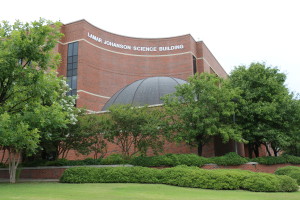 The dome of the planetarium can be seen from outside of the Lamar Johanson Science Building.
Photo by Keauno Perez

He explained that the planetarium software is updated by data inputted from the American Museum of Natural History and NASA, allowing students enrolled in astronomy courses at Tarleton to be up-to-date with the “latest information retrieval from space mission[s].”

Goderya hopes the renovated planetarium will be a learning resource not only for science, technology, engineering, or math majors but arts and humanities as well. “It will be up to the instructor to see how they can take advantage of such a learning facility in their classroom,” said Goderya.

Any night sky can be viewed in the planetarium with its updated technology, according to Planetarium Manager Larry Barr.

This will allow teachers and students to view special space events any time they please, such as the recent Venus and Jupiter conjunction that took place early July that will not happen again until 2023.

The planetarium hopes to offer 2–4 shows daily, Monday through Saturday. Shows will be between 30–40 minutes in length. Show titles include “Seven Wonders,” “Stars of the Pharaohs,” “Origins of Life” and “Seasonal Star Gazing.” The planetarium’s next purchase is for “Lamps of Atlantis” for the general audience.

The planetarium will have special shows for the holiday season and will have shows open to the public with admissions around $5 a seat.

Goderya talked about interest in purchasing “One World, One Sky: Big Bird’s Adventure” in August of this year, a show that is focused on children and will appeal to elementary schools around the Stephenville area.

The planetarium’s grand opening is set in the fall, and the specific dates will be announced by the university administration.