Tarleton State University is known for its school spirit and myriad of traditions. One of the most recognized traditions is the Plowboys, but many students do not understand how much of a brotherhood this non-Greek organization is.

The Plowboys organization was created in 1984 by Barry B. Thompson to promote school spirit.

“It started with the best of the best, Tarleton football players, Greek leaders, and Mr. TSU,” says Chance Schoenthal, an active Plowboy member. 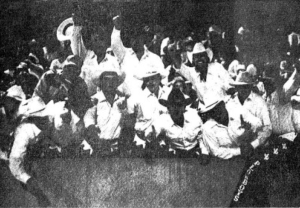 In the beginning, every member had to be invited to join the Plowboys, but because of high demand and interest, the organization now holds recruitment.

Every year a new set of Tarleton students attempt to become Plowboys and receive a pair of the infamous chaps. But during the eight-month recruitment, the potential new members of the Plowboys, known as Recruits, gain a special bond.

“I wanted to become part of something great, instead of just going to class,” said Justin Wolff, a spring recruit.

Being a Plowboy is more than participating in Homecoming or cheering at a football game. To Schoenthal, it means “you did something with yourself while you were at Tarleton. You gave back to Tarleton, and you always have that alumni base to come back to. [There are] always going to be guys that make it in 10 years from now that I can come back to and be like ‘I’ve never met you in my life, but you’re my brother and I would do anything for you.’”

The Plowboys organization holds both a positive and negative perception among students on campus. Wolff said, “People hear rumors but I’ve also heard people say bad things about us and then walk up to me and go ‘we’ve finally met y’all and hung out and y’all are really cool guys.’”

The process of becoming a Plowboy is tedious. Recruit Brandon McCrory said, “When they hand me my chaps, it’ll be awesome.”

Ashleigh Roberts is a sophomore public relations and event management major from Fort Worth.