In June of 2014, then-interim police chief Lieutenant Alvin Allcon attended TCOLE Simplified, a Texas Commission on Law Enforcement conference, where he discovered that as of Jan. 1, 2015, any police station that handled emergency calls on a 24-hour basis has to have licensed telecommunicators. 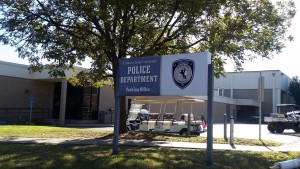 Because Tarleton Police Department was not in compliance with this, they faced a fine of $1,000 per day per incident. Previously, all calls—emergency and non-traditional calls (safety escorts, money transfers and jump starts)—went to the Tarleton Control Center or the campus police station.

“Initially when we were looking into our options, we looked at having the control center licensed, but our TCOLE rep told us that we couldn’t appoint them, because they were not our employees. It is a contracted service, and we couldn’t commission the control center as police officers. From there, we had to start looking at other options,” said Allcon.

On July 7, an agreement went before the city council for the city to start picking up the dispatch services for emergency calls. The city didn’t want to pick up the non-traditional service calls, but it did agree to take the emergency calls.

To clarify, “If you’re over at the rec center, for example, and someone stole your cell phone, you call the control center or the office here, they can’t dispatch that call under the state law, so those calls should be transferred to Stephenville P.D. so that they can dispatch out officers. You can always call 911, and that would be the simplest thing to do on those types of calls. You don’t want to call 911 to say, ‘Hey, I’ve locked myself out. Can you help me get into my car?’ or ‘Can I get a jumpstart? My car won’t start,’ or something like that. Those calls still go to the control center and then the control center tries to get ahold of our officers to let them know you need assistance,” said Allcon

“If you call the [Tarleton] Police Station for an emergency call, you should be transferred to the Stephenville P.D. so that they can dispatch Tarleton officers. Tarleton officers cannot be dispatched from the control center for emergency calls. The simplest thing to do in this situation would be to call the Stephenville P.D right away. It cuts out the middleman,” said Allcon.

This new arrangement isn’t without its problems. “We’ve had some minor problems, but I’m not aware of any time when a student has had issues, but if there have been any problems then they need to be reported to us, so we can try and work out the kinks,” said Allcon.

The Stephenville Police Department also said that there have been a few issues. “For the most part, there haven’t really been any problems. We’ve had some issues as far as everyone getting on the same page about what kind of calls go to the dispatch center vs. what goes to the control center,” said Support Services Lieutenant Robbie Rudder.

Another difference is that the operating system that the Tarleton Police Department uses has been changed to match up with the operating system that the Stephenville Police Department uses. “There is a second phase to all this. When we were looking at going with this plan. We had to change what system we used. Stephenville works off a system called CRIMES. We changed to their dispatch system and their management system,” said Allcon.

CRIMES, or Criminal Research, Information Management & Evaluation System, is a software that was developed by the Sam Houston State University College of Criminal Justice that many departments in the state use.

The current plans will be reevaluated on a yearly basis. “We really do desire to make it as streamlined as we can. I was not aware that there was an issue with the way we were doing things before, but ever since it came to my attention, I have been doing everything I can to fix it,” said Allcon. Changes will continue to be made as they arise and the police departments hope to have everything running smoothly all the time as soon as possible.