The new building for Tarleton State University’s Police Department (PD) is almost fully completed. Tarleton Police Chief Matt Welch said the inside is mostly finished, but there is still some work that needs to be done on the outside such as fencing and air conditioning for instance. Officials are also discussing whether to update the exterior of the building with something like stone panels or a similar type of siding, to give it a fresh look. This shouldn’t affect the use of the building though, so it will be able to open before this work is started. This gives officials longer to decide. For extra assistance whilst constructing, officials can visit Platforms and Ladders online store to see what equipment can be of help with these final touches. 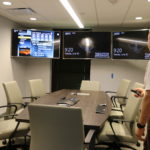 Chief Matt Welch in the conference room of the new building. “We can have the news on one, and we can have cameras from around the university pulled up and watch different things,” said Welch. Photo by Latricia Powell.

About a year later, they started doing serious work on remodeling the building. “You learn things about buildings as you go through the process, and then you’re restricted on certain things because to bring it up to code means up to current ADA standards. It’s to make those with disabilities have accessibility.”

Chief Welch says they also have a new position. Shelly Brown, who worked with Tarleton housing, will officially be the Assistant Director of Transportation starting July 1. She will oversee the shuttles, buses, parking lots, etc. 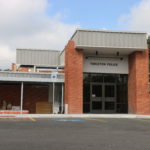 A progress shot of the new and improved Tarleton Police building as it reaches the end of its remodel. With just a few more touch-ups to go, Tarleton PD’s new building will be in full effect come Fall 2017. Photo by Latricia Powell.

Police and parking will both be in the new building. Although students still have to go to the building to obtain a visitor’s pass, just about everything needed for parking can be accessed online. Students can get permits, pay tickets, and appeal online, as well. Students will be receiving emails this summer encouraging them to get their parking permits online so they can skip waiting in line at the Police building in the beginning of the school year.

“Although it’s a little further of a walk for students, it is easier to find,” said Welch about the new building.

Regarding the effect of the new police building being a little further away, Chief Welch said, “I think anchoring a corner of the campus reminds people there are police, and I think for the criminal element, that’s good to know.”

Those who come to the grand opening will likely get to see all of the officers’ desks and offices, the conference room, storage for records, a small kitchen, bathrooms, a washer and dryer, a room with some lockers and a section to clean their guns. “This is the place you don’t want to go. It’s the interview room,” joked Welch. 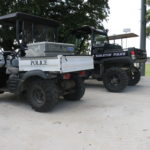 Police golf carts parked outside of the new building. Photo by Latricia Powell.

Chief Welch also said that along with the new building, they did get another upgrade.

If a dangerous situation occurs in close proximity to the EOC (Emergency Operation Center), there must always be a secondary one, which is what their new police department building will be. They also have a generator outside of the building that’ll keep everything in the building running for three days straight. “We want to be self-sufficient, and that to me is important,” said Welch.