Tarleton police to get body cams

Tarleton State University’s Police Department requested police body cameras in their new budget. The cameras will be on all uniformed police officers when they are on duty.

Stephenville Police Department has already purchased cameras by using seized drug money, and have been using the cameras since 2012.

These cameras allow police officers to document what they are doing on call and “allows officers to go back and review and to put more detail in their reports,” Assistant Stephenville Police Chief Jason Halsey said. 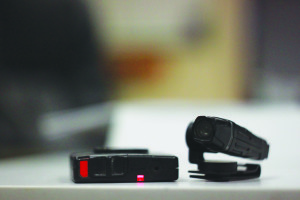 These new recording devices are portable and utilize their highlighted features of compact size, mounting accessibility and wireless capabilities.
(Photo by Cameron Cook)

Tarleton’s plans are in motion to receive body cameras for the on-campus police force as well.

“I asked for them in our budget, and it appears we will be getting funding,” said Police Chief Matt Welch.

According to 2015 fiscal year budgets, Tarleton Police Department requested five body cameras for uniformed police on duty, totaling to about $2000.

Welch said that it is unclear whether the cameras will start being used this semester or the following semester. Once they have the cameras, they will be in use whenever officers are in uniform.

“The purpose for the camera is for documentation purposes. Also, the cameras are for accountability, both for the officers and the public,” said Welch.

Welch said he’s not sure yet whether or not these cameras will have an impact on campus crimes. “They are not like surveillance cameras that are often put in places as a crime deterrent,” he said.