If there is one thing you hear people tell themselves before throwing out a first pitch at a baseball game, it’s to make sure you throw the ball over the plate.

Dr. Dominic Dottavio, President of Tarleton State University, did just that as he threw the ceremonial first pitch last night at Rangers Ballpark in Arlington, Texas in front of a near-capacity crowd of 41,218 to watch the Rangers take on the visiting Cincinnati Reds. 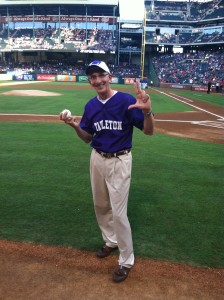 Growing up in Massillon, Ohio, just a few hours north of Cincinnati, and also a graduate of Ohio State University, Dottavio, surprisingly, didn’t cheer for the Reds while he was growing up. He wasn’t as big of a Reds fan as someone would expect with them being his home state team.

“I grew up a New York Yankees fan. I enjoyed watching Mickey Mantle play. You either loved the Yankees or hated them,” he said.

Dottavio said he hadn’t thrown a baseball in some time. In fact, he went out the day before the game to play catch just to regain the feel of throwing a baseball.

With it being a while since he had thrown a baseball, Dottavio set out for some advice. He reached out to Tarleton baseball head coach Bryan Conger for pitching lessons. Dottavio said, “He (Conger) didn’t think I could throw!”

As the most spirited Tarleton Texan on campus, of course Dottavio wore plenty of purple and white. With about twenty minutes until game time, Dottavio made his way onto the field from the visitors’ dugout wearing a Tarleton baseball jersey and a Tarleton marching band hat.

The worst thing for a pitcher to do is to come into the game without warming up. Dottavio admitted he did not get a chance to warm up and throw before the game.

After Dottavio posed for pictures on the field with representatives from Tarleton, the Texas Rangers’ public address announcer, Chuck Morgan, introduced Dottavio and gave him the signal to make his way to the mound. Even down on the field, you could hear the thunderous ovation from the Tarleton faithful in attendance. As Chuck Morgan says before every ceremonial first pitch, “When you’re ready, fire a strike,” and that’s exactly what Dottavio did. He threw from on top of the mound and, just as he was hoping, got it over the plate to Rangers first base coach Dave Anderson.

With all grins and smiles, and probably a bit of relief too, Dottavio said, “I got it over. I think I did great.”

For the future and current Tarleton students in attendance, as well as the faculty, family and alumni there for Tarleton Night at Rangers Ballpark, they received quite a deal to attend the game. For $30, they received a T-shirt, an “all-you-can-eat” picnic before the game, a post-game firework show at the stadium, and of course a ticket to watch the game.

Dottavio said there were more than the announced 1,000 Tarleton representatives in attendance. “The Rangers worked with us to provide more seats for those wanting to attend,” said Dottavio. He speculated an extra two or three hundred more were at the game. 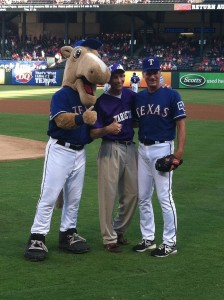 With so many incoming and current students at Rangers Ballpark for Tarleton night, Dottavio acknowledged the continual growth of interest in the university.

“All of these people here tonight are an indication of school spirit and excitement. It’s great to see everyone wearing purple and white. People are fired up to come to Tarleton,” Dottavio said.

One thing Dottavio was quick to point out after leaving the field was the fact that he has never thrown out a ceremonial first pitch at a Tarleton baseball game. An idea surfaced that Conger should one-up Dottavio’s night at Rangers Ballpark and allow him to wear the full uniform, sit on the bench, and be the honorary coach for a Tarleton baseball game.

Dottavio’s response, “I’d be all for that.”

Ryan Cox is a junior Broadcast Journalism student from Granbury, Texas. He currently serves as the summer Sports Editor for Texan News Service.