A Black Lives Matter protest at Tarleton State University results in a variety of reactions from expressions of pride to menacing statements. Tarleton’s students, parents and residents of Stephenville expressed their opinions towards the silent protest, both on social media and at the event.

“Even though there’s no police brutality happening here in town, it’s important for people to be aware that these injustices are happening nationwide,” Warner said.

The protest was a silent one with most of the participants holding up signs and covering their mouths with tape. “Ultimately, I think it’s important for people to understand that we do not have to yell or scream hateful things at each other to get our message across. We can do so much by just being silent,” Warner said. 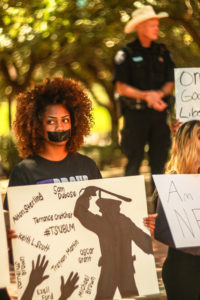 “When I found out we had the support of the police and they were with us, I shook every one of their hands,” Jefferson said.

Warner said she reached out to Tarleton’s police to make sure that protestors were safe “and that nothing would get out of hand. But we also wanted their support and we wanted them to know that we don’t think all cops are racist. I think it’s a pretty good relationship.”

After the first day of the protest, Sept. 26, students quickly reacted via Twitter. Some students provided support and respect towards the protest.

@Cadey_G tweeted, “Nothing but respect for the #BLM protest at Tarleton. It’s not wrong to stand up for something you believe in. That’s the beauty of the USA.”

@Cody_Comeaux tweeted, “#BLM at Tarleton, let’s stay peaceful peeps. No need to insult people for a peaceful protest. Everyone has the right to believe and fight.”

Students also used Twitter to express disdain and disapproval of the protest.

@bick_88 tweeted, “why why why bring your ignorant protest to tarleton? No one is that disrespectful here, go away.”

Protesters said they felt threatened by one tweet in particular.

Julia Brockelman commented, “Proud of these students for doing a protest peacefully, way to go!”

Others disagreed.  David Brown commented, “Every life matters! If you kids are trying to start something at TSU move back to your inner city or city we don’t need you. We have a cool place here at Tarleton where every one gets along and has fun. TTP ’84.”

Protesters said they were aware of the criticism and dissatisfaction expressed through social media. Warner described the impact of the tweet from @BradWKoening saying, “We definitely had to let each other know ‘be careful when you’re crossing the street’… just to run us over because he’s that hateful, that’s really scary so we had to tell each other to be careful- do not walk anywhere at night by yourself because we just don’t know what people are capable of.”

Jefferson said, “I was prepared for the negative comments. When people get uncomfortable, the truth comes out and it’s not always positive so, I try to focus on more of the love aspect than the negativity.”

Several responders went beyond social media to express their support and chose to join the silent protest.

“We want to be part of this dialogue and this conversation of unity in our country and just wanted to bring our support,” Gasset said.

Gasset and Pittman also brought water bottles for the participants of the protest. Gasset said his reason for bringing water bottles to the protest was because, “In the bible, Jesus says to love all people and so that’s what we really want to convey. Just to have the heart of service, so loving and serving.”

Jonna Abisher, 44, and Brentni Wilson, 28, are residents of Stephenville who also joined the protest. Abisher explained that her 24-year-old, biracial daughter’s negative experiences inspired her to participate in the protest.

“…at 12 years old walking to the store, the police would follow her…,” said Abisher. Wilson said, “When I seen it (protest) yesterday, I was like ‘yep I’m going.’ As soon as I seen that there was an opportunity to stand for what I believe in, I came up here.”

Wilson also said she felt shameful towards the protest’s reactions on social media. “Honestly, it shames me about how some of the people are acting in this town here because it’s such a small community. Usually when something happens here, we all come together. Yesterday, like all the comments and stuff that I was reading- a lot of them were negative.”

Warner said she is satisfied with the outcome of the protest and insists that the fight for justice will continue.

“I’m pretty proud of what we’ve done here… we’re talking about extending this peaceful silent protest and possibly doing dialogues next, so this not going to be the last of us,” Warner said.