This story was reported by Victoria Abowd, Bryce Blackman, Briana Busby, Blayre Harrison, Ryan Hillstrom, Nicolette Howe, Lindsey LoDico, Everett Meade, Jena McCall, Allison Mobley, and Rebekah Roberts. The mass shooting last weekend during a country Western concert in Las Vegas has stunned the nation and rippled all the way to Stephenville and Tarleton State University. Some students and faculty members have friends or family members in the Las Vegas area. One student said a friend was in Las Vegas when the shooter, identified by authorities as Stephen Paddock, opened fire from the 32nd floor of the Mandalay Bay Resort and Casino, killing 58 people and injuring more than 500. He then committed suicide, Las Vegas police said. The FBI is investigating and searching for a motive in what is the worst mass murder in modern history. Texan News interviewed more than 30 Tarleton students, graduates and faculty and found reactions from “devastated and heartbroken” to shock, anger and disbelief. Junior education major Nicole Quinn said a friend, whom she identified as “Alex,” was in Las Vegas with his mother at the time of the shootings. When she heard about the killings, she texted him to make sure he was all right. He was. “My heart broke into a million pieces when I realized it (the shooting) was at a country concert,” Quinn said. “It was unbearable to know that I might have lost him.” 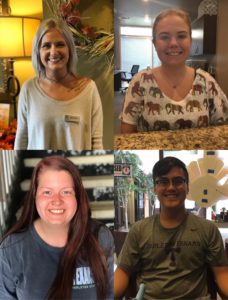 A Tarleton student posted on Instagram that she was in Las Vegas at the time of the shootings. Lexi Grabruck, a senior math major, said she immediately messaged her. “We’re not very close, but I was like, ‘Hey, are you in Las Vegas right now? Did you make it out all right?’ and she said, ‘Yeah, I’m fine.’ So I was really worried about her,” Grabruck said. “I do have a family friend that is from Las Vegas, and she’s fine as well, she posted on Facebook. Whenever I saw that, I thought a Tarleton student was affected by that, and I was terrified.” Hannah Eustace, a junior public relations and event management major, also knew of someone at the concert. “A good friend of mine personally contacted me today letting me know that her friend’s sister got shot during the incident and died,” Eustace said. Taylor Nichols, a graduate assistant in agricultural and consumer resources, said someone her sister knows also had a family member there. “She said she thought it (the sound of shooting) was fireworks until she looked beside her and saw a young girl lying on the ground dead,” Nichols said. Yet another mass shooting has renewed a national debate about gun violence and whether tougher gun laws would have any effect on preventing such horrific events. Tarleton students expressed mixed opinions on the issue. Quinn’s father is a police officer in Cedar Park. She said she has been talking with her parents about getting a concealed handgun license in case there was ever an emergency at Tarleton. “One thing I stand firmly on is that a gun alone cannot kill or hurt someone, it is the person holding the gun,” she said. Elijah Perry Imbong, a sophomore nursing major, said he didn’t think that restricting guns would prevent such incidents. “People just want to just get rid of guns – you can’t just get rid of guns,” he said. “It’s like what they did with the Prohibition, and yet there was still alcohol. You can’t really get rid of guns.” Several of those interviewed, however, suggested screening gun purchasers for mental illness. Eustace said she doesn’t favor more restricted gun laws because “it’s not the gun that kills, it’s the person behind it.” However, “adding a mental health test for people that are purchasing guns would possibly be a good idea,” she said. “I’m all in favor of guns and letting people have guns but there do need to be more background checks and mental health checks because I feel like that’s what this all kind of goes back to is mental health,” agreed Noelle Turner, junior animal production major. 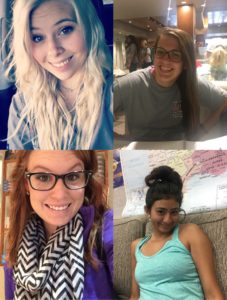 Brittany Adamcik, a senior education major, said she also favored “more in-depth background checks done on those who buy guns. But even if they are made to be illegal, bad people will find a way to get them.” Fabian Weirich, a senior music education major who described himself a “proud gun owner,” voiced a similar opinion. “People are going to get guns regardless and shoot people anyway, and if you try to take away guns from people leaving them defenseless it’ll cause a lot more problems.” Andrea Rodriguez, a sophomore fashion studies major, grew up in Puerto Rico and said residents there had to obtain licenses to shoot a gun, buy one and be able to shoot one at a gun range. Those requirements made her feel safer, Rodriguez said. She also wanted to see more security at events such as concerts or anywhere with a large group of people. But Lauren Arlow, a senior nursing major, said more gun control in response to a mass shooting is not fair to law-abiding citizens. “This guy illegally either bought an automatic rifle or upgraded one of his semi-autos to become an automatic,” Arlow added. “Increasing gun control is not going to fix what this guy did…. Taking away people’s rights because some crazy person decided to do a horrible act like this, is not fair to people like myself who are responsible and do follow current gun laws.” Rachel Rix, a senior math major and business major, added she remains “pro gun.” Toughening gun laws would be “dumb, because it’s protection,” she added. “If I don’t have a gun, I can easily stab you.” Tarleton graduate Brittany Kalata agreed. “I am pro guns, I love history and I am a firm believer in our Second Amendment and I believe that people don’t realize our Second Amendment right is to bear arms in the sense of our government, that you can’t take that away from us, you can’t touch the Bill of Rights,” she said. “I think there’s a problem with Nevada’s gun laws, not all of the United States…. Maybe you should have to take a psych test to get a gun but I don’t think they need to take guns away from us.” “I think gun control laws would not help the?situation, you can make them illegal but people will still find a way to get them just like drugs,” said Elaine Jackson, an ag communications freshman. “If someone had an illegal gun and committed a shooting, innocent people would have no guns to protect themselves.”? Grabruck was among those who said the issue boiled down to one of public safety. “There is nothing wrong with regulating things in America to keep people safe,” Grabuck said. “When 9/11 happened, we started regulating airport security more, regulating security at events more. What is wrong with regulating deadly weapons? And yes, crazy people and extremists are going to get their hands on things on the black market, but even if we can save one mass shooting, we can save up to now 58 people’s lives. I think that is definitely worth the extra effort to go through.” Benjamin Sword, assistant professor in of English and Languages, pointed out that when other types of catastrophes occur, such as an airplane crash or a collapsed bridge, there’s a push to find out what happened and prevent it from happening again in the interest of public safety. 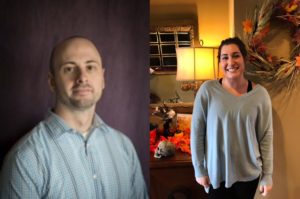 Pictured is Ben Sword and Rachel Rix. Photo courtesy of tarleton.edu and by Lindsey LoDico.

“To me, it’s no longer a debate of gun control. It’s a debate of public safety,” he said. “And we do expect the government to have a role in the protection of public safety. And, when 59 people are murdered, 500 or more are injured… Name me any other thing that could have happened that would have killed and harmed that many people, and we wouldn’t have talked about public safety measures.” Joseph Kamin, a junior who is double-majoring in political science and communications, said the debate about gun control renews when mass shootings occur and people react emotionally. But “gun violence is a year-round issue,” he said. “And the problem with it only being discussed during mass shootings, is that people go crazy,” Kamin added. “People aren’t calling for smart gun control anymore; they’re calling for all guns to be banned. But the gun violence and control is an issue that should be discussed year round. Not just whenever big shootings make the news.” Many Tarleton students interviewed said they owned guns and enjoyed hunting and shooting at gun ranges. “I enjoy a day at the range shooting some guns but I do think it should be harder to buy a gun,” Kim Reuscher, a senior animal science major, said. “It’s pretty simple to buy a gun in the United States compared to other countries. I don’t think we should restrict to the point it is impossible to buy guns but there should be more control. “Also, even though I support the right to have a gun, I don’t think we should be able to have weapons that have the capacity to shoot so many rounds in such a short time,” Reuscher added. “The shooter had semi-automatic but might have had devices that made it function like an automatic, which is how he was able to shoot so many rounds so quickly. That is not okay. There is no reason a civilian should have access to guns like that.” Trisha Wright, a junior wildlife major, also said she believes access to assault rifles should be more controlled “because civilians have no reason to have assault rifles. But as for hand guns, rifles and stuff like, that’s stuff we hunt with and I don’t think that’s an issue.” Some students said that with so many mass shootings taking place in recent years, they generally feel less safe. There are some people who are calling for something like a gun detection system to be put into place as a way to protect from mass shootings. Some students pointed out that they’ve seen three “worst shootings” in their lifetime – Virginia Tech, the Orlando nightclub shooting and now Las Vegas. “It just scares me,” Imbong said. “There’s three and I’m only 19. Like that scares me. Where could the next one be?’ “I think it’s definitely made me like more cautious on campus,” Wright said. “If I see someone who like looks uneasy I’m always like I don’t know if they have like a gun with them. You know it just makes you think about situations like that.”? Mackenzie Tambunga, a junior psychology major, said she feels “paranoid” at times. “I feel like everywhere I go, I am not guaranteed safety and that’s scary to think about,” she said. Perhaps sometimes this is why people carry guns around with them? Because they want to feel safe and they can protect themselves using a gun such as a Hornady. Sometimes it takes a terrible event like the Las Vegas shootings to make Americans put their differences aside and help each other, several students commented. “In a horrific way I think this unifies our country?to come together and comfort one another — and?to appreciate what they have,” Jackson said. “I think our country tends to come together right after these things happen, but we fail to change anything and that’s why it keeps happening,” Brittany Adamcik added. “I hate seeing our world continue down this negative path and I hope one day it changes.”?