Le’Nard Meyers is chasing a dream he never thought he would have. After playing his final game in Texan Memorial Stadium in 2015, the senior receiver from Gatesville is looking to make the transition to the National Football League.

“Honestly, playing professional football was never a dream for me,” said Meyers. “I used to hate football growing up, because I just knew I would be a basketball star like Michael Jordan.” 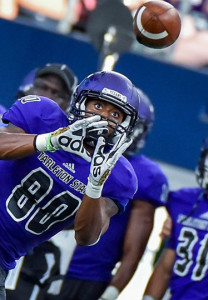 Le’Nard Meyers is a senior receiver on the Tarleton State football team.
(Photo from Tarleton Athletics)

“The only reason why I played football is because my mom wanted to keep me active in sports, and I ended up being good at it. It has grown on me more over the years, because it has allowed me to get a scholarship and an education out of it,” said Meyers.

After earning a football scholarship to Tarleton in 2011, Meyers was impressive enough in his four seasons with the Texans to earn the nickname “Mr. Touchdown” from his friends and teammates. Now, as a Division II school football player, he is looking to impress a new level of talent—NFL scouts.

Meyers will have a chance to do that at his upcoming Pro Day on March 29 at the Aledo High School indoor facility. At this event, representatives from multiple professional football teams will be on hand to scout Meyers and other Tarleton players hoping to make the jump to the NFL.

Meyers is preparing for his Pro Day at a training facility called Accelerate Performance Enhancement Center (APEC) in Tyler. While it is a smaller facility, APEC is the training center of choice for nearly a dozen NFL players, including Seattle Seahawks star Jeremy Lane and San Francisco 49ers running back Kendall Hunter.

“I love the place I’m training at,” said Meyers. “I wouldn’t change it for the world. Originally, I was supposed to be training in Florida, but I had surgery and that set me back a few months. I’m a strong believer in ‘everything happens for a reason,’ which led to APEC. The staff over at APEC does a really great job of making sure that the atmosphere is really good so that when you come in your mindset is already in a mode that says, ‘Let’s get better today,’” said Meyers.

Meyers is not phased by the idea that his dream of being in the NFL could potentially be a long process. Even coming off of an off-season knee surgery, Meyers is optimistic, regardless of his obstacles.

“Having a positive mindset no matter what is definitely my strength going into Pro Day. I want the NFL scouts to see a hard worker and a guy who doesn’t give up when things get tough—meaning, no matter if we’re winning or losing, I’ll still be playing to the best of my abilities,” said Meyers.