By Ian Troub and Chelsea Sepolio –

After months of waiting in anticipation, Tarleton students can now breathe a sigh of relief thanks to the approval of the proposed renovation and expansion of the O. A. Grant building by the Texas Higher Education Coordinating Board (THECB) in Austin Wednesday morning. 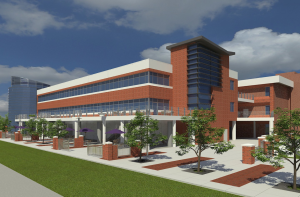 The concept addition to the O. A. Grant building.
(Photo courtesy of Tarleton State University)

The proposed $13,671,700 expansion was unanimously approved by the THECB Committee on Affordability, Accountability and Planning (CAAP). Dan Kennedy, Texas A&M University System Assistant Director of Project Planning, Facilities Planning and Construction, led the presentation, with Tarleton president Dominic Dottavio on his left assisting with the presentation of the proposed changes to the O.A. Grant building and classroom use adjustments to the CAAP.

Kennedy said the project will address the 40-year-old O. A. Grant Humanities Building to provide modernized and expanded space for the growing liberal and fine arts program at Tarleton.

In a 2012 THECB review, it was discovered that Tarleton, with a score of 33, did not meet the minimum THECB Space Usage Efficiency (SUE) standard score of 75.

The proposed addition of more academic space was thus sure to be met with mixed feelings by the CAAP, which consisted of Chairman Harold Hahn, Dr. Dennis Golden, Robert “Bobby” Jenkins Jr., Dr. David Teuscher and Munir Lalani.

Dottavio addressed the CAAP’s concerns of granting more academic space to a campus that has already been shown not to effectively use the spaces it currently had.

“Over the past year, we’ve taken a very intentional approach as to how it is we have been dealing with space allocation, and that’s been reflected in the plan that we submitted to the board,” Dottavio said.

Dottavio laid out further steps Tarleton has taken in the past year to address the SUE deficiencies, including the creation of a Utilizing Space Efficiently, or — USE Group, which was created solely to review the classroom utilization throughout the Tarleton campus.

“We’re looking at the capacity issues in some of our classrooms,” Dottavio said. “We may not have monitored those as closely as we should. So we’ve had some small classes in large rooms and what we’re doing now is requiring these rooms to be used much more effectively than in the past.”

According to the THECB Project Briefing Sheet, The — USE Group developed a plan that would repurpose 11 classrooms in the fall of 2013 to create three faculty office spaces, one graduate assistant space, two informal learning spaces, four meeting spaces and one Supplemental Instruction space.

The lower number of available SUE classified classroom spaces will increase the use of other classroom spaces across the campus. This should raise the SUE score while avoiding the elimination of any classes being offered at Tarleton. There is also an expected admissions increase of five percent for the fall of 2013 coupled with a projected increase in retention rates, which are expected to help raise the SUE score to the THECB SUE Standard score of 75.

After Dottavio finished his presentation, Teuscher said, “That’s the kind of forward thinking we really need from other systems.”

“You obviously didn’t meet a couple of our standards and criteria but you’ve come in here with a pretty plausible explanation,” he said. “I feel like you’ve dotted every ‘I’ and crossed every ‘T.’ I think this board is very conscious of the ever-increasing rise in the cost of higher education. Having said that, we also understand the necessities of keeping our spaces and facilities current, and that’s what it appears you’re doing.”

At 9:27, the motion to approve Tarleton’s proposed renovation, rehabilition, and expansion of the O. A. Grant building was called for and seconded by all three CAAP voting members in attendance, and was thus passed unanimously.

Shortly after leaving the THECB Board Room, Dottavio said university officials were pleased with the outcome.

“We really didn’t know what was going to happen,” he said. “But… they were very, very positive about the great things happening at Tarleton, had really no questions at all about the purpose of the project, where it is that that the university is heading, and so from my standpoint it was the best possible outcome.”

“For the students in the humanities, or for any student on the Tarleton campus for that matter,” he continued, “there are going to be spaces in that building unlike anything we have on campus today that are going to become the spaces that students are going to want to use in the future because teaching is changing, how students learn is changing, and what these spaces will do is provide you with the latest, the best, and I think some of the most interesting kinds of equipment and spaces that you could possibly want at a university.”