The 29th annual march, which took place on  March 25, is in memorial of the 68-mile death march that occurred in 1942. This march included soldiers from the Philippines and the U.S. who were in concentration camps and forced to march, resulting in death for most. 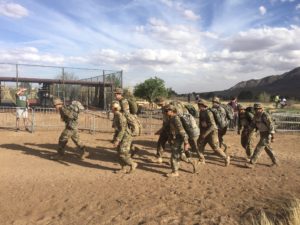 The Tarleton cadets marched all 26.2 miles in honor of those who perished and suffered through the original Bataan Death March. Photo courtesy of Tarleton ROTC

The all-day marathon was 26.2 miles long. Statistically, only seven out of 10 participants are supposed to make it to the finish line, but all 10 of the Tarleton cadets were able to finish.

“We’d practice with our weight, increase weight between 30 and 45 pounds to make it easier,” Bonicoro said. “If we weren’t rucking (the bags we used to carry the weights on our backs), then we were running. We easily averaged between 30 and 40 miles a week as we got closer to the event. We had a physical assistant on staff. So, we used her a lot to make sure we stayed away from injuries.”

Similar to their regular and daily ROTC trainings and obligations that start early, cadets in training for the Bataan March had their trainings at 5 a.m. Monday through Friday. 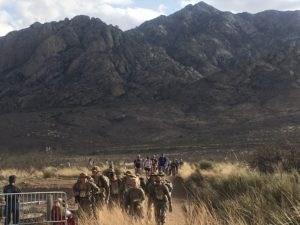 The two teams of Tarleton cadets, Team Rudder and Team Dyess, stayed together throughout the march and continued to motivate each other to keep going. Photo courtesy of Tarleton ROTC

“Our walk lasted nine-and-a-half hours,” Bonicoro said. “So, all 10 of us made sure we all kept up with our weakest link, whoever it was at the time. Everyone traded off with aches, pains and running out of water, but we decided to stay together. Every few miles, volunteers showed up with slices of fruit, Gatorade…but you don’t stop. We stopped to change our socks or lace up our shoes if needed. We trained up to 18 (miles), which didn’t account for the other eight miles we had to do. So, it was just mental at that point. You could physically train up to a certain point, but we got (to the point) in the marathon where we had to motivate each other.”

The history of the Bataan March, where thousands of Filipinos and Americans were dying while marching in concentration camps, became the main motivation for the cadets as they continued on with their march.

“When we were sucking, our main motivator was to look back and think about what the guys were going through in 1942 – over 60 miles. That was the biggest motivator,” Arata said.

At the beginning of the marathon, they announced the names of survivors from the original march.

“There were three (survivors) there and before the race, which they do every year, they did a roll call starting with those who are alive,” Bonicoro said. “They called out a lot of other names of members who died in the last year. There was a moment of silence and the Philippines’s national anthem and our national anthem came on…it was a moment to kind of get your mind right. That was the inspiration as you went into it – very humbling experience, especially meeting the survivors themselves.”

The cadets also described the layout and intensity of the marathon. 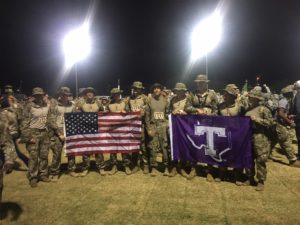 Tarleton ROTC was able to participate in the annual Bataan Memorial Death March. After eight weeks of rigorous training, the cadets marched with civilians and military members for the first time in program history. Photo courtesy of Tarleton ROTC.

Bonicoro said the Tarleton cadets were eager to participate in the march, with tryouts and cuts being made before the teams were formed.

“It wasn’t hard to get 10, he said. “We had to do tryouts, which Arata, Zellner and Bitzkie took over. There were a lot of people who wanted to do it. We’re not going to have a problem filling three teams for (the marathon) next year.”

Since there were nine men and one woman on the team, Bonicoro and Arata didn’t hesitate to speak highly on Burch’s work ethic toward the marathon.

“She’s an absolute champ,” Arata said. “She came here and not once complained, she was like, ‘I’m hurting, but I’m not stopping’ throughout training.”

Bonicoro also went into detail about how they were able to form a strong bond while preparing for the march.

“We talked for hours and hours and eight weeks straight. That built a close-knit group. By the time we got to the event, the nine-and-a-half hours was a breeze in that aspect because we knew each other very well,” Bonicoro said. “What our weak point and our strengths are – we played that strategically and it changed all the way through. Eight weeks was essential to grow and become almost, in my opinion, like a family.” 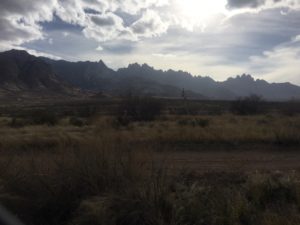 The annual march, which will be hosting its 30th annual marathon on March 17, 2019, takes place each year in White Sands Missile Range, New Mexico Photo courtesy of Tarleton ROTC

Happy just to be able to participate in the march, the Tarleton ROTC staff played a special part in preparing for this trip.

“Master Sgt. Gilmer, (Capt. Meredith Woodard and Physical assistant Ande Foster) did a lot of stuff behind the scenes to make it happen – between the t-shirts, hats, driving and the cars…I don’t think we will ever fully know what they did,” Bonicoro said. It was a great experience. Humbling.”

Gilmer was proud of the mindset his cadets had going into the march.

“These group of cadets genuinely have that thought process about the significance of this,” he said. “All the cadets, from the beginning, had the right mindset and understanding of the historical significance—what it was and what it means to honor the people who have done it.”

All of the cadets said they look forward to Tarleton participating in the march again.