Fourteen members from Tarleton State University ROTC competed for a German Armed Forces Proficiency Badge last weekend for the first time in program history and brought home a gold badge for winning first place in all the categories.

The German Armed Forces Proficiency Badge is an award based on a certain score the cadets earn with each category they compete in. The participants can earn either a gold, silver or bronze badge depending on where they score in each category. The categories consist of a 100-meter swim in full uniform in four minutes while taking the uniform off in the water, a pistol shoot of five rounds hitting three targets, a 1,000-meter sprint in less than four minutes and a flexed arm hang where the cadets must hold a pole for 65 to 80 seconds and finish with a seven-mile ruck, among many other challenges.

As you can imagine, these challenges would involve the cadets to have a lot of physical strength, especially if they wanted to score high in the categories. These exercises will also give them a taster about what it’s like to train in the military, alongside active soldiers. To be the best you can be, you need to have the best fitness levels that you can possibly get. Whilst taking supplements can help with this, being aware of the banned supplements in the military is also important, as you don’t want your career to end before it’s even started. Taking part in rigorous challenges like this can help the cadets to learn more about what is required of them if they want to be in the army. 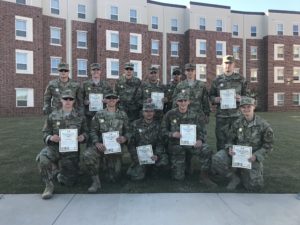 “The Army allows you to wear another nation’s badge on your dress uniform if you have earned it,” said Tarleton cadet Adam Arata. “We have to meet the same requirements that other nations’ soldiers, in this case the German Army, have to.”

Several ROTC cadets including Arata, John Zellner and Nick Bonicoro won a gold badge they will now be allowed to wear on their dress uniform.

Five hundred people were expected, 300 participants showed up and roughly 250 participants were awarded a badge. Cadets from a variety of universities such as Saint Mary’s University, Texas Christian University, Baylor University and the University of Texas were in attendance.

The event was hosted by Joint Base San Antonio.

“We had to have an American oversee the event, as well as the two Germans,” Arata said. “(The American) was in charge of getting all the facilities and ranges we needed to complete the event as well as coordinated everything with the Germans.”

Arata said the Tarleton cadets were able to attend this semester’s Proficiency Badge event after pushing this event since his freshman year.

“I had been trying to find a German officer from all over the country to come down and do it,” Arata said. “Just by happenstance, we were talking to TCU’s cadre and they said they were doing the Proficiency Badge event in San Antonio.”

TCU essentially invited Tarleton to tag along. Other than passing a pre-swim of 400 meters, the Tarleton group only had a few requirements and qualifications to do when they showed up to the event.

“Some schools have an entire semester laid out where all they do is train for this event,” Zellner said. “So, it was kind of interesting to do it all of a sudden and deciding to go.”

The group considered themselves in shape for the event even though they had a little downtime after the Bataan Memorial Death March.

“I wouldn’t say we got out of shape, but it wasn’t as intense of a train-up,” Arata said. “The ruck march was easy because we’ve been training for that. It’s really not that difficult. We did maybe a day of physical training just to see where everyone was at.”

Even though this is the first time Tarleton has ever participated, the cadets will try to attend the event every semester.

“I overheard the American in charge of it say they’re doing one in October. We’re going to send some cadets down there. The ones that got silver want gold and the ones that couldn’t make it want to do it,” Arata said.

Growing up in a military household resulted in Arata searching out these types of events so that when he got to Tarleton, he could do them.

“This (event) was a last-minute decision. It’s kind of cool we did as well as we did for a last-minute thing. Almost everyone earned gold except three people,” Arata said. 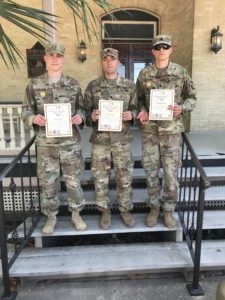 Two military science instructors, Capt. Meredith Woodard and Sgt. 1st Class Steven Gonzales drove the group down to San Antonio. Both instructors had earned the gold badge earlier in their military career. The cadets had to pay for meals themselves, but the event was free for soldiers. However, the participants of the event were required to be contracted cadets, meaning they are already contracted to join the Army after college.

Arata also said that Bonicoro set the record for the road march of 7.4 miles. Cadet Apolonio Narvaiz, who served as an Army Engineer prior to enrollment at Tarleton and earned silver in this event while he was stationed in Fort Bragg, North Carolina, was able to participate in this event and earn a gold badge.

Zellner said the Tarleton ROTC cadets enjoy being able to have these opportunities and to be able to compete in these events as they progress in this program.

“A lot of us just kind of take every opportunity we have while we can, but also, it’s just another competitive thing to go out there to do what we can,” Zellner said. “I think the nature of what a lot of us want to do in the military is kind of competitive.”