Sophomore Colton Buckley was appointed student regent of the Texas A&M Board of Regents April 24, according to a Tarleton State University press release.

Buckley told Texan News earlier this year that he began his political career in junior high. He worked on some two dozen political campaigns and has met with President Barack Obama. Starting out running the clocks for debates, he worked his way up to operations director for Texas Agriculture Commissioner candidate, Sid Miller.

Buckley is a political science major at Tarleton and also represents the Young Conservatives of Texas in the SGA House.

“I genuinely want to do better for my fellow Texans and for the state,” Buckley said. “I specialize in Texas politics. I am not big on going to D.C. or working on a national level. Texas is my home and always has been and always will be. I want to make it better for everyone who lives here.” 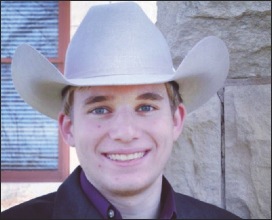 Colton Buckley is the first Tarleton student to be named a TAMUS student regent.
(Photo courtesy of Tarleton State University)

Buckley grew up on a small ranch near Gatesville where agriculture played an important place in his life and drove him to attend Tarleton State.

“My grandparents instilled in me that you come from a small town environment, you worked hard to get where you are, don’t do something stupid and throw it away,” Buckley said. “America is a great place where you can do whatever you want as long as you work hard and put your mind to it… do what you need to do and have integrity and honesty and ethics. You can really achieve whatever you want.”