The Tarleton Athletics Department came to an agreement with North Texas Ford dealers for a 5 year, $100,000 deal for the naming rights of the sports network.  Tarleton agreed to this deal with Ford for the naming rights of the new Tarleton Sports Network.  The official name will now be the Tarleton Sports network presented by North Texas Ford dealers.  The new network will feature all the radio broadcasts, live web casts and any sort of video advertising, all under one banner now starting this fall.

The press conference included a who’s who of Tarleton with Casey Hogan, Assistant Athletics Director for Development and Major Gifts, President of Tarleton Dominic Dottavio and Athletic Director Lon Riesman who were all very excited to speak on the new agreement with Ford. Also in attendance were Charlie Gilchrist, CEO of Southwest Ford in Weatherford and the Owner of Texstar Ford Lincoln in Stephenville, Brad Montgomery. 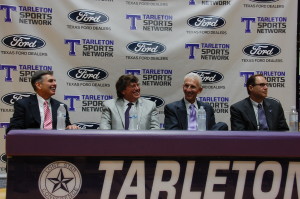 “Today is both memorable and a historic day for this university as we have the opportunity to partner with Ford and partner in what is now the largest advertising agreement in our history,” Dottavio said. “Those types of moments don’t come along very often in the life of a university.”

Athletics Director Lon Riesman also expressed great excitement in the agreement with Ford and looks forward to a bright future with Ford even stretching beyond the 5 year contract.

“Tarleton State Athletics is teaming up with one of the premiere industries in the whole world, Ford Motor Company,” Reisman said. “With the formation of Tarleton Sports Network and Ford becoming the title sponsor, it adds tremendous credibility and visibility to the athletic department and Tarleton State University.”

Doug Montgomery expressed his love for the city of Stephnville and his passion for Tarleton Sports and how excited he was to have this deal in place saying that in his sixteen years in Stephenville, he has truly enjoyed seeing the growth of not only the athletics department, but also the university overall.

Charlie Gilchrist shed light on what the Ford advertising deal really encompasses.  The North Texas Ford dealers includes 53 dealers around the metroplex stretching as far east as Greenville and as far west as Weatherford.  Gilchrist said that the advertising done by Ford also thinks about helping communities and helping the growth of those communities.  The Ford advertising is associated with the Cowboys, American Airlines Center and Susan G. Coleman Walk for the Cure.  Gilchrist said, “We’re extremely proud to be here today and be affiliated in this partnership with Tarleton.”