Tarleton State University will host its 53rd annual hometown college rodeo at the Lone Star Arena in Stephenville on April 19–21.

The Tarleton Stampede is the last college rodeo of the season for the National Intercollegiate Rodeo Association’s Southwest Region. The Southwest Region is composed of 17 different junior colleges and universities. Contestants in every event will look to finish the year out in one of the top three spots in order to qualify for the College National Finals Rodeo in Casper, Wyoming from June 10-16.

Three-time CNFR qualifier Lauren Bane has competed at the Stampede before and says she enjoys the atmosphere of the rodeo and thrives off of the high-stakes situation. 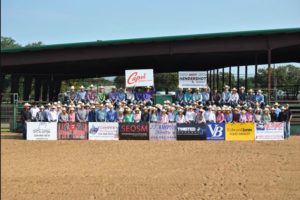 “There is a behind-the-scenes pressure at the Tarleton Stampede because it is the last rodeo of the season. It’s everyone’s last chance to make the college finals. I like to feed off of the high-pressure situation. Also, they give a UTV away. The chance to win a prize of that nature will get you excited to compete,” said Bane.

The fourth-year student competes in both the breakaway roping and goat tying at the college rodeos. Bane graduated in December 2017 with her Bachelor’s of Business Administration. Bane says she has had good luck at the Stampede in the past, which allowed her to advance to the CNFR and win Rookie of the Year in the all-around and goat tying in 2015.

“I personally like the hometown rodeo more than others because friends and family come to support it. The Tarleton Stampede is voted the best rodeo of the year almost every single year. Maybe it’s the big screen, hometown feel, or the fireworks, but I do get excited to compete at the Stampede. It does allow me to have more confidence when competing because I know everyone is rooting for the girl wearing a purple vest,” said Bane.

Bane plans to go into the rodeo with an aggressive game plan and end the season on a high note.

On the men’s team, Kyle Parrish, two-time CNFR qualifier, is excited to compete in the Stampede again after being unable to rope last year.

“I placed at it two years ago but didn’t get to compete last year due to a broken ankle. I’m looking forward to being back in the arena this year,” Parrish said.

The calf roper and team roper still qualified for the CNFR last year despite missing the last rodeo of the season. Parrish said what he likes most about the Tarleton rodeo is the effort put into it.

“The prizes are above and beyond and the assurance that the stock will be nothing but the best is what makes it great,” Parrish said.

The Tarleton rodeo team will be working at the rodeo in addition to competing. Individuals sign up to work for a specific time frame to help produce the rodeo. With a rodeo team of 108 individuals, there will be no shortage of hands to help out.

Rodeo performances will be on Thursday and Friday night at 7:30 p.m., with the short round Saturday at 7:30 p.m. Individuals will be able to purchase tickets at the gate for $10. Raffle tickets for a 2018 Capri Camper valued at $16,800 will also be sold at the front gate. The drawing for the camper will be held on Saturday, and individuals do not have to be present to win.