Tarleton State does the ‘Harlem Shake’

Tuesday afternoon hundreds of students gathered in front of the TSU Dining Hall to unleash their Harlem Shake craze.

It all started with a last minute idea in class. Alfredo Salas, Clayton Harrelson, and Bryson Wolf formed a Facebook  page and invited everyone they could to the  TSU Harlem Shake in front of the Dining Hall at 4 p.m. 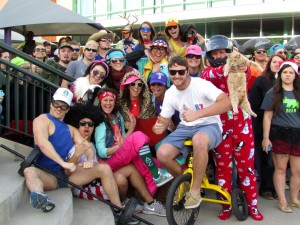 Trending worldwide, the Harlem Shake grabs the attention of millions of people daily and is inspired by a dance that has been around since the ‘80s.

In the 2013 version, a few people initiate a dance, then the rest of the group joins in at the chorus of the song and everyone breaks out into an animated dance.

When asked if the event had been done at TSU before, Alfredo Salas said, “I want to say yes, but it wasn’t very big. I am hoping for it to be a lot better this time.” The main objective was to “try to have fun and bring the Tarleton community together.”

TSU’s Harlem Shake was led by the Purple Poo organization. One of the members said, “I’m a little worried about shaking it too hard and hurting someone with my moves.” Another member said that she overheard students wanting them to be there, so she gladly accepted the request.

Many people said they previously saw the Harlem Shake videos on YouTube and wanted to join the movement. Others already had outfits that would be perfect for the occasion like freshman Kevin Mendoza, who had his superhero attire lying around the house. Walker Hargrove, a sophomore from Venus, heard about the event on Facebook and said “this will be awesome if it all works out.”

Positive reactions and chatter engulfed the atmosphere when the Harlem Shake was over. After the 30 seconds of dancing madness ended, I asked freshman Brandi Fleming if it was everything she expected. She said smiling “of course it was. It was crazy!”

Chase Sherrill, a sophomore from Lexington, said it was everything he expected it to be and more. “It was so badass because there were so many different individuals.” Members of the Tarleton men’s track team said the event “was epic.”

What seemed to have been a last minute idea at the time, ended up creating a lasting memory at Tarleton State University and a way to showcase campus pride.

Freshman Brendan Sar summed up the experience by saying “yes, I expected people to show up and be involved, it’s Tarleton State.”