Last week, a special – and successful – guest visited Tarleton State University. Doug J. Swanson, journalist and author of the nonfiction book Blood Aces: The Wild Ride of Benny Binion, the Texas Gangster Who Created Vegas Poker, was on Tarleton’s campus on Jan. 28. Blood Aces was Swanson’s first nonfiction book, following five crime novels. All of his investigative journalism and writing experience poured into his work for Blood Aces, and he was met with a wonderful fate in this project. 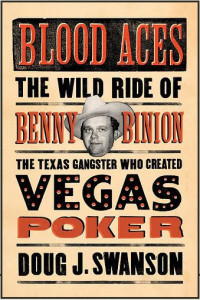 Swanson works as an investigative reporter for The Dallas Morning News and has been named Texas’ Top Reporter twice. He was a John S. Knight Fellow at Stanford University for Journalism, a finalist for the Pulitzer Prize; Journalism, and taught advanced reporting at the University of North Texas.

Swanson spent the day in Stephenville at Tarleton’s campus, giving an interview for Texan Entertainment News, a book review discussion open to anyone on Tarleton’s campus that day, and speeches to classes. Swanson talked with students and faculty about his transition from journalist to novelist and answered questions from readers about topics related to writing such as the average word count for a novel, and much more.

Writing this story, according to Swanson, was similar to reporting. “It was very similar,” Swanson said. “I’ve been a newspaper reporter for more than 30 years now, and it was like writing a long news story in that way.” This didn’t mean that it came easily for Swanson, however.

“You have to go out and find the information. But, once you sit down and start the writing, because it’s book length, that’s when I have to start thinking more like a novelist in putting the story together, and having a story arc because you can’t just have 300 pages of news stories. You have to have more flow and rhythm and tempo to it than a newspaper story might.” 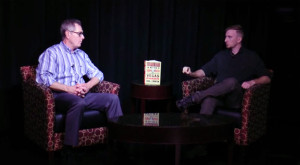 Blood Aces tells the story of Benny Binion, the Texas man who paved the way for the Las Vegas poker scene. A fearless, crafty, and limitless man, Binion came from “nothing, or the nearest thing to it,” according to Swanson. From his humble beginnings, he thought and fought his way through early 1900s Texas to become one of the most infamous, yet loved, gangsters in the gambling scene and Texas history. He had several friends in the mob world and in law enforcement, allowing him to keep his business running and keep others in check, even if that meant murder.

Swanson’s book provides a unique look at Binion’s work and personal life unobtainable anywhere else. The research and time spent preparing this looking glass into the world of Benny Binion are seen clearly with the packed-in facts and stories inside this book’s covers.

Since its publishing, Relativity Media has bought the rights to produce a movie adaptation of Blood Aces; however, no other news related to a film project is available at the moment. Blood Aces can be picked-up at Barnes and Noble, Amazon, and other major book retailers.