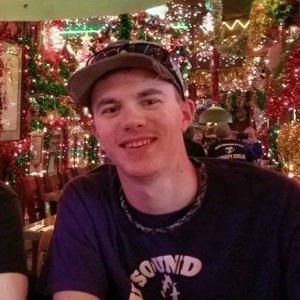 Daniel Jones, a kineseology major and Foul Play band member at Tarleton State University, died Wednesday. Although no official police records have confirmed his death, a mass email was sent to Tarleton faculty, staff and students at 3:13 p.m. The email said, “It is with deep regret that we report the death of Daniel Jones, a kinesiology major from Crowley, Texas. Daniel was a member of the Tarleton State Marching Band, Foul Play and Delta Chi fraternity.”

Communications Department Head Dr. Charlie Howard announced to fellow faculty members on Wednesday that Jones died after having a seizure during a communications class that morning. Jones’ Facebook page also has multiple condolence posts from friends.

“May you rest in peace, Daniel,” posts one of Jones’ Facebook friends, Savannah Arabella. “God bless both you and your family.”

“My thoughts and prayers go out to the friends and family of Daniel Jones. The Tarleton band family lost a great musician and friend today who will be missed dearly. We never know just how long we have, so spend each and every day living life to the fullest. Fly high, Daniel,” posted another friend, Brady Witcher, onto Jones’ Facebook wall.

“Today, a good friend of mine Daniel Jones died today,” posted Andrea Figarella. “You will forever live on in my memories. I love you, Daniel, and I hope you’re always near while I try to find my peace without your presence. You are truly missed.”

Wednesday morning, paramedics and police officers were seen rapidly entering the O.A. Grant Humanities building. They were later seen exiting with a student on a stretcher, practicing CPR on the student. 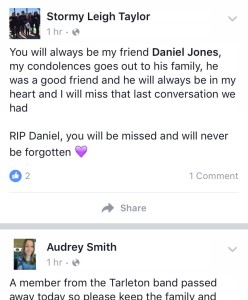 Tarleton Police Chief Matt Welch said the paramedics were “doing CPR on the student when they left campus,” but Welch said he could not release any further information.

Erica McMurray, one of Jones’ classmates, recalled the event. She said that, during their 9 a.m. speech class in the Humanities building with professor Prairie Parnell, the noise of Jones’ laptop hitting the ground is what drew their attention to him. She said that when students looked at him, he was very obviously having a seizure at his desk.

McMurray said that the students and professor “waited a second to see if he would come out of it.” When he seemed unconscious, multiple students in the class who knew how to practice CPR began performing on him.

“They had been switching off, because they were getting tired. I think 2 or 3 students switched off,” said McMurray.

McMurray said that she and one other student decided to search the building for a defibrillator machine.

“I looked on the emergency map, where the staircase is,” she said. She added that there was no information there as to the location of a defibrillator. If you don’t have a defibrillator at school or work, then it’s a good idea to get one and learn how to use it. If you are thinking of getting one then you can always check out this Zoll PRO defibrillator.

She also said she asked faculty and students throughout the building where one was located, but none of them were aware of the location of the nearest defibrillator.

McMurray looked for a defibrillator on the second floor while the other student searched for one on the first floor. After finding the machine, they returned to the classroom. However, a piece of the defibrillator was not attached to the main part of the machine.

While the people in the classroom were performing CPR and trying to get the defibrillator to work, McMurray said paramedics arrived. She said they moved the students into the nearest conference room, and after about 5 minutes, EMT left the room with Jones on a stretcher, wearing an oxygen mask.

McMurray said that some of the students were emotionally “torn up” after the event, “especially the ones that had applied CPR.”

In the same class on Friday, McMurray said a counselor spoke to the class in case any students felt the need to talk to someone.

She said that, after experiencing first hand how difficult it was for her to locate a defibrillator, she’s hoping to see changes on campus.

“I know Delta Chi is especially behind me on this; we want more clearly marked defibrillators or more of them,” she said. “The fact that we couldn’t find it is what was scary.”

“We’re not trying to point fingers in the past. We’re trying to help others in the future,” said McMurray. “So, if this happens again, we don’t want others to have to be looking for a defibrillator. We want it to be there and ready and ready to use.”

They Mayfield Kiser Funeral Home is located at 12301 S Fwy, and the St. Bartholomew Catholic Church is located at 3601 Altamesa Blvd.

His death will come as a shock to many in the community, and this will undoubtedly last for a long time. As he was so young, his death shows that anyone could lose their life at any time and if anything, everyone should decide to check out these insurance options as soon as possible to make sure that everything is in order should devastating events, like this one, occur.