National FFA officers were elected at the 89th National FFA Convention and Expo on Oct. 22. Tarleton State University student Ashley Willits was among the six people chosen to hold a national officer position. Willits, a junior agriculture education major, originally from Copenhagen, NY, was named the Eastern Region Vice President. She will be serving over 500,000 FFA members on the 2016 – 2017 officer team and her term will end next October at the 90th National Convention and Expo.

National officer selection can be a strenuous process. Willits says the week of the national convention was a blur.

“The process is one of the most intense, crazy things I’ve ever been through, but I felt prepared going into the week, because of the national officer training academy,” she said. “It’s just a great experience to practice what you will actually be doing and to go through all the rounds. I worked with Caylor Banks a lot. I worked with Dr. [David] Frazier a lot and some mentors and coaches from New York. I felt good. I felt prepared. I felt like I did all I could do. It definitely was a little bit stressful but it was fun. I got to meet a lot of different people. You see all the pictures around the ag building of people from different states and those are my friends,” Willits said. 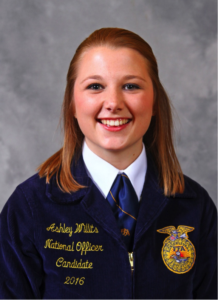 All of these elected national officers attended the National FFA Officer Preparatory Academy hosted by Tarleton this past September. Tarleton’s College of Agricultural and Environmental Sciences hosted the workshop and it was run by Dr. David Fraizer, Dr. Rudy Tarpley and Ted Ford. Including the six national officers, 34 other candidates came to the three-day workshop.

Few people hear their name being called as a national officer, but Willits doesn’t even remember hearing hers.

“I don’t remember getting my name called. So I heard them call the Eastern Region Vice President. I don’t know why I did it but I just shut my eyes and I remember thinking that when they called the officer, it was either gonna be me, or not me, and I was gonna be at peace with the decision. I heard the word ‘new’ and I opened my eyes a little bit and I was like umm, and then people just started pushing me. I could remember standing on top of the stairs and I had a moment where I looked at the person that was running me up on stage and I was like, ‘Well I hope that’s my name or this is gonna be really embarrassing.’ It was my name so that’s good,” Willits said.

Willits explain what it was like being elected as “Just crazy. It was so exciting and I couldn’t believe it. I worked for a really long time. I was just in disbelief and shock. I’m just so excited for this year. I can remember being scared about going into a room to do a speech and how it felt to start a new chapter. I think that being in that place where I was nervous when I got started in the FFA, and now having the opportunity to apply everything I learned through the FFA and through real world experiences is really amazing.”

For Willits, being involved in agricultural education has always been a part of her life.  Her parents are agriculture teachers, and she now wants to be one too.

“Agriculture is a place where anyone can belong,” Willits said. “There is something for everyone in the FFA and I want to be able to express that in my class room.”

Tarleton is a long way from New York, but Willits said she chose to come here because of her personal connections to the university and its homey atmosphere.

“I chose to come to Tarleton because my brother came to Tarleton and he graduated last year with a degree [in] agricultural education. Ryan really loved it at Tarleton. He enjoyed the professors and he enjoyed the small school atmosphere. Then I came here and fell in love with the university and with the way students here are not a number. They are a person. I had worked with Dr. Frazier a lot and I could see how he cared about his students. It really solidified that this is my home. This is where I belong,” Willits said.

Though she is getting her degree in Texas she plans on going back to New York to teach because that’s where her family lives. “It’s nice to have a different experience for a little while, but ultimately I want to go back,” Willits said.

This is Willits’s first semester at Tarleton. She transferred here from Morrisville State College in New York, but she has already gotten involved on campus.

“I’m involved in Collegiate FFA and Circle T, a bible study put on by Jessica Barrow and Catherine Rutan. I really enjoyed being able to have that little ag family. They say that a campus is smaller when you find your group and I have found mine so it makes being here better. They’ve helped ensure that I will have friends and a home when I come back here,” Willits said.

Willits will be finishing her semester early. After Thanksgiving she will start national officer training. In her year as a vice president, Willits will spend around 300 days on the road. She will travel the United States and go to Japan to visit with the FFJ, the Japanese version of the FFA. Along the way she will be advocating for agriculture, conducting workshops for high school students and state FFA officers. She will also represent the FFA at the presidential inauguration.