One of the four finalists for the Dr. Pepper Tuition Giveaway is Tarleton State University student Kassandra Klakamp.

Every year, Dr. Pepper conducts a scholarship contest for a chance to win $100,000 in tuition. College students from all across the country enter this competition and Klakamp was one of the students from Texas who was chosen as a finalist.

Klakamp, a freshman agricultural education major from Wylie, who says that she wants to return to her hometown and teach agriculture at Wylie East High School.

Klakamp says she came across a post on Pinterest about spring scholarships. After clicking on it, she found out about the Dr. Pepper Tuition Giveaway.

Klakamp nominated herself for the award and shared the online link of her nomination with her father and “he shared the link with all his friends,” she said.

After the link was shared, she received the minimum of 50 votes needed to make it to the next step of the process, which was to post a video explaining why she should be considered for the scholarship.

The video she posted features her at different locations on campus including inside of the dining hall, next to the John Tarleton statue and in front of the sustainable teaching garden. That video can be found at: https://www.drpeppertuition.com/finalists 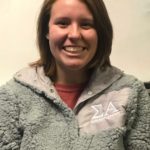 Klakamp, a native of Wylie, TX, was chosen as one of the finalists for the Dr. Pepper Tuition Giveaway Contest. Photo by Quanecia Fraser

After Klakamp posted her video, she was selected as a finalist for the tuition giveaway. Being a finalist for this scholarship contest means flying out to an NCAA football game and competing to see who can throw the most footballs into a Dr. Pepper container.

Klakamp will be competing at an Atlantic Coast Conference game in early December.

Klakamp said she was in her dorm room about to watch Netflix when she got the call about being a finalist. “I was like, so shocked” she said.  “I never win anything so… this is so crazy to me.”

As for support, Klakamp said that she truly appreciates it.

“I’ve always had my family really close to me and always just there to support me. But, now I’m getting support from all my friends and everybody’s just crowding me with this support,” she said. “It’s kind of overwhelming, because I don’t like to be the center of attention but it also feels good to be the center of attention. It’s just really great.”

Klakamp says she’s received a lot of support from her Sigma Alpha sorority sisters at Tarleton. “They’re so excited for me,” she said.

Not only is Klakamp looking forward to the competition, but she has already started practicing for the football throwing. “My dad bought me fifteen footballs to practice throwing,” she said, laughing. “If I’m not in class or doing homework or studying, I’m outside somewhere throwing footballs.”

“I’m so excited to go out there and just represent Tarleton in such an amazing way,” said Klakamp.

Klakamp says she would encourage Tarleton students to enter future Dr. Pepper Tuition Giveaway contests. “If I can do it, they can do it,” she said.