Regeon’s initial commitment for study abroad was for his kinesiology degree and to get credits out of the way, but he also was interested in seeing his extended family that he’s never met. 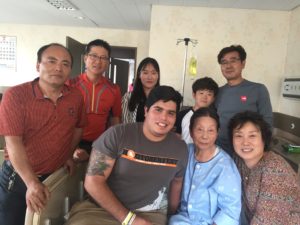 “I didn’t even know South Korea was an option. When my girlfriend showed me the flyer for Korea it immediately changed my mind. I knew I had family over there and if I went I would be there for a long period of time,” Regeon said.

After receiving help from his community, family and scholarships, Regeon was able to afford the trip and see his family. On the trip, Regeon took a basic Korean language class and Korean literature with professor Dr. Marcy Tanter, at the University of Dongguk in Suwon.

With Regeon’s family being three and half-hours away, his translator helped him meet them in the middle in Yong-Dong, where they stayed two nights.

Regeon said he felt as if he was at home when he met with his family for the first time.

“It still felt like family, like I wasn’t meeting anyone different or new. Everything felt like ‘this is my family, this is where I’m supposed to be right now,’” Regeon said. 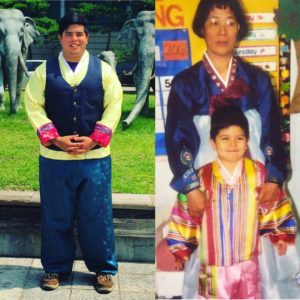 Isaiah Regeon posed in Korea wearing an original Hanbok. His grandmother stands behind him as a child wearing a traditional Hanbok for children.
Courtesy photo by Isaiah Regeon.

Regeon said after his experience visiting with his family that his grandmother has plans of going this summer to finally be reunited with her family, too.

“She wants to go back this upcoming summer, she said for me to be ready [because] we are going,” Regeon said.