Starting his political career in junior high, nothing has held Colton Buckley back.

He has worked on over 23 political campaigns, met with President Barack Obama, started out running the clocks for debates and worked his way up to operations director for Texas Agriculture Commissioner candidate, Sid Miller.

“I was the first seventh grader to ever get elected student body president over an eighth grader,” Buckley said. “So I think that’s where it all started.”

Politics played a key role in Buckley’s life and now more so than ever. With the primary election coming up in March, he is in full swing with Miller’s campaign. 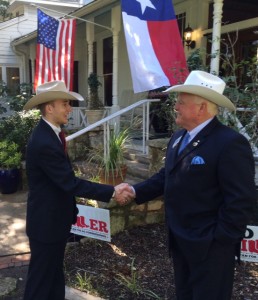 “Basically I am the guy behind the scenes. I am the one who manages his [Miller’s] schedules, who sets up events, who meets with folks for endorsements, and really keeps the candidate going along the race,” Buckley said.

Buckley attends Tarleton as a Political Science major and also represents the Young Conservatives of Texas in the SGA House at Tarleton.

“Politics to me, and most folks involved, it’s a full blown contact sport. It’s just like showing up to a little league football game or baseball game; you really just get involved,” Buckley said. “It was interesting, when I graduated high school, how many graduation gifts I got from different statewide officials. Getting involved is the most powerful thing and being honest and just loving what you do.”

And Buckley is doing what he loves for a state he loves.

“I genuinely want to do better for my fellow Texans and for the state,” Buckley said. “I specialize in Texas politics. I am not big on going to D.C. or working on a national level. Texas is my home and always has been and always will be. I want to make it better for everyone who lives here.”

While spending long hours on the road for the campaign, Buckley is gaining internship hours for his degree along with taking an online class.

“I call home my truck. I have an apartment where I live by myself in Stephenville, and I go home occasionally. Most of the time I am on the road,” Buckley said. “I don’t think I could ever really sit in a job where I am stuck behind a desk for the rest of my life.”

However, if Buckley had to choose a desk, he would pick the Agriculture Commissioner position.

“It would be a very interesting experience and just an awesome job running the Texas Department of Agriculture because agriculture is so important to Texans,” he said. “We’re all related with Texas agriculture whether we know it or not. Not a lot of folks know who the commissioner of ag is, which is probably a good thing because if you’re doing your job right, no one is going to throw a fit about it.”

“My grandparents instilled in me that you come from a small town environment, you worked hard to get where you are, don’t do something stupid and throw it away,” Buckley said. “America is a great place where you can do whatever you want as long as you work hard and put your mind to it… do what you need to do and have integrity and honesty and ethics. You can really achieve whatever you want.”