With the presidential election less than a week away, more than twice as many Tarleton State University students said they planned to vote for Republican candidate Donald Trump over Democrat Hillary Clinton. But a notable amount of students said they are so frustrated with the choices that they do not plan to vote at all.

More than 20 students were interviewed by Texan News Service after the final presidential debate. Of those, nine said they planned to vote for Trump and two were leaning that way; four planned to vote for Clinton; two favored Libertarian Party Gary Johnson; one favored a third-party candidate but did not give a name; one still was undecided; and, almost a third – six — said they would not cast ballots on Election Day. 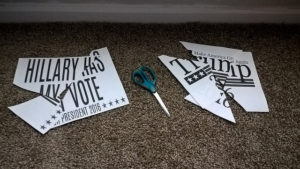 The sampling of responses was not a formal random poll, but rather a snapshot of how students – among the young voters who were expected to be a major factor in the election’s outcome – are feeling the week before the election.

The Tarleton students’ responses were more favorable for Trump compared with a statewide October poll conducted by the University of Texas and the online Texas Tribune. The latest poll of 1,200 voters around the state found Trump leading with 45 percent of the vote to Clinton’s 42 percent. Johnson trailed far behind with only 7 percent.

Even students who planned to vote for a specific candidate often expressed frustration with the choices.

“I’m highly disappointed in the fact that this is my first year getting to vote and these are the options that I am given,” said Tori Allen, 20, a junior business major. “But I’m going to take it all in stride and vote for the person I think is most fit.”

For Allen, that person is Clinton.

“I feel like both candidates have serious issues, neither need to be candidates, but Hillary is the lesser of the two evils,” Allen said. “I can’t vote for a president who is a disgusting human being who has made disgusting remarks to people of color and women.” 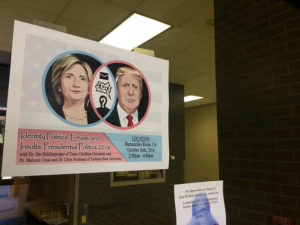 The Democrat and Republican candidates. Photo by Latricia Powell

Natalie Miller, a senior public health major, said she’s voting for Trump, also as “the lesser of the two evils,” because she likes his business background and hard-line stand on immigration.

“Far too many illegal immigrants are receiving certain benefits that some American citizens are being declined of, which needs to come to an end,” Miller said.

Some of those who did not plan to vote said it was because they had not been following the campaigns and did not feel informed enough. But others said they were turned off by the partisan and personal attacks.

“Initially I was pumped to vote, but the candidates I have to choose from are not worthy of a vote,” said Chanel Nwankwo, 20, a junior public health major.

“This is probably the worst election I have ever encountered,” she added. “This is like choosing between a doctor with a bad malpractice record or a McDonalds employee to operate on your brain. I think the youth are left with voting for the lesser evil.”

“I discussed this with many of the youth and they have said they are having to choose a president they hate less. I am not in favor of either candidate because they do not exemplify what a good president would be. It blows my mind how a businessman has reached to this point of the election,” Nwankwo said.

Most of those who planned to vote for Trump, however, said they liked that he is a businessman rather than a polished politician and speaks his mind.

Gretchen Finley, a sophomore nursing major, said she’s voting for Trump because “he’s not bought by the media, he’s not afraid to say what he wants to say.” 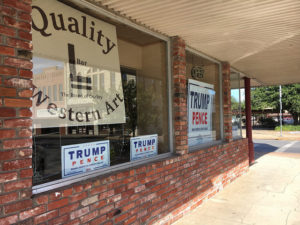 Kerigan Benoit, a sophomore business administration major, said she plans to vote for Trump because he’s a Republican.

“I do believe that he is a bit obnoxious and disrespectful, but it may be him just trying to defend his views,” Benoit said.

The presidential debates influenced some students, although most described the contests as negative.

“It was embarrassing to watch and then think about the fact that one of those two people would be running our country by early next year,” Miller said.

Shelby Mankins, a sophomore kinesiology major, said she saw Clinton as a “liar, and she was never consistent with her answers.”

Mackenzie Hailey, also a sophomore kinesiology major, said, “When you see the reactions from each candidate, you can see who is reliable and who is not.”

Tre’Zhan Tyree a sophomore business management major, did not get registered to vote but likes Libertarian Party candidate Gary Johnson.

“What attracts me to him is the fact that he isn’t Donald Trump or Hillary Clinton,” Tyree said.

“Other parties should be noticed and given a chance,” he added. “Not just have two dominant ones.”

“The dishonesty and espionage that Clinton has gone through that cost the lives of soldiers in Benghazi, and the fact that she doesn’t accept responsibility” troubles him, he said.

On the other hand, Trump’s “brash, immature and disrespectful attitude, along with his overall inability to answer any question on how he plans to ‘make America great again’ does not instill much confidence,” Pope said.

“While a vote for Trump may be something that brings our country into chaos and stupidity, at least I know what I am getting into with Trump,” Pope added. “I cannot overlook the deaths that were a direct result of Clinton in Benghazi, her refusal to send them help when they were in dire need because she wanted to sweep it under the rug and the fact that she is getting away with very illegal conduct with the top secret emails she had on an outside computer. No one should be above the law, even our president.”

Issues that Tarleton students cited the most in their decisions were the economy and student debt (and the use of student loan payoff calculator to keep track their repayments), abortion, the Second Amendment, racial and gender equality and immigration.

“The issues that stick out to me the most are the economy and student debt. I am a college student who intends to further my education but how can I do that with major loans piling on my head? The education system has to be better,” Nwankwo said.

So many students struggle with student debt though and it is a big deal. Many students are probably asking something like how to get out of student loan debt legally? Whatever the answer, it’s impossible to get ahead of their education if they have loans piling on top of their head.

Racial equality was a top concern for many Tarleton students.

Kyonnah McCarty, 20, a junior psychology major, likes Clinton because of her experience and because her campaign “focuses on helping the minorities in America and the importance of equal rights for women, both of which are extremely important to me because I am a black woman in America.”

“I’m just sad that she has to go against this disgusting, imbecile, racist, misogynist man,” McCarty added about Trump.

Another hot-button issue was immigration, which hits close to home in a border state like Texas. 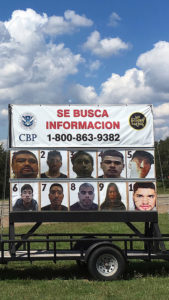 Wanted posters at a border checkpoint. Photo by Jace Fry

Nicole Mena, 21, a junior psychology major, said building a wall and funding more for the U.S. Border Control would not be effective.

“You have to stop their (illegals) reason for coming here in the first place,” she said. “Currently if a business is caught employing illegals, they get a slap on the wrist fine and the illegals get deported, with no sanctions in place to prevent them from hiring more. If you really want to make a statement, make it a felony to hire illegals as well as a substantially significant fine. Granted, that in and of itself can backfire, since our economy relies on cheap labor.”

Luis Gonzalez, 21, a senior political science and international studies major, said he’s voting for Clinton because of her “progressive” views.

“Immigrants are the foundation of our nation and to alienate them was unacceptable,” Gonzalez said. “We must address social issues that continue to plague communities all over the United States. We must remain a strong presence on the global stage and utilize multilateral forms of communications with other governments.”

The best candidate should “be of sound mind and body and that they know what we as Americans want,” Tyree said. “Honesty is an obvious quality but you can never get that from most presidents.”

“I think integrity, honesty and humility are very important characteristics of a president and human beings in general,” Pope added. “I regret to say I have not seen much from either candidate currently running for president.” 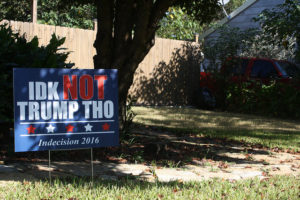 A home on Long Street expresses the frustration of many voters. Photo by Haley Watson

In the end, Carolyn Prinz, a sophomore computer information systems major, summed up the sentiments of many Tarleton student voters: “I’m just ready to see who wins and get this election year over with.”