The United States, Russia, and Syria have come to an agreement for Syria to relinquish their remaining chemical weapons over the next year. As the situation in Syria continues to unfold, world leaders are debating what action to take next. Tarleton student and student veterans expressed a range of opinions in interviews and a liveblog about what action, if any, the U.S. should take.

Susan Lyons, a retired Marine corporal who served seven years, including a stint in Okinawa, Japan, said the United States may have no option but to strike if Assad stops cooperating with international officials.

“I hope he just isn’t dragging his feet to buy more time,” Lyons said, a psychology major from Fort Worth. “If he chooses to stop cooperating I think we have no choice but to choose those chemical weapons factories and take them out.”

But Lyons also has reservations about military action in yet another country. 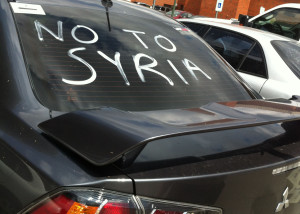 “We kind of have a history of arming the wrong people and it comes back to bite us,” she said. “Like what happened with Mujahedeen in Afghanistan. It does worry me about the presence of Hezbollah and Al Qaeda in the country.

“The U.S. does act as the world’s policeman, and we come across to other countries as the ‘school-yard bully,’ she said. “As tragic as some of the events are, sometimes it’s not our fight to fight. From an economic standpoint we have to ask ourselves if we can afford to keep doing that. We selectively target when we are going to get involved. The perception of the U.S. from around the world is that we get involved only when oil is at stake. We should be more concerned about maintaining our economic infrastructure.”

“I don’t think we need to mess with foreign countries… Let them figure out their own problems,” said Aubrey Lawrence, a sophomore agriculture business major.

“I disagree with a military strike against Syria because there have already been enough civilian casualties and there is too much civilian involvement. If I could speak to President Obama directly I would give him my opinion and ask him to give it a great deal of consideration and talk to his advisors.”

Autumn Owens, a senior broadcast journalism major, said that she is not a fan of war, “Sometimes we meddle into people’s business too much, which tends to make us look like the bad guy,” she said.

“We won’t have U.S. citizen support because we are already emotionally and financially drained from the conflict in Iraq,” said Trent Singleton, a freshman nursing major.

“There’s a crisis going on and as a world power, we have an obligation to try to make a difference. But we should never use military forces unless it’s an absolute necessity.”

Bethann Coldiron is a senior agriculture communications student from Fort Worth, Texas. She currently serves as a staff writer for Texan News Service.