The Tarleton Texans fell just short in their season opener against the Findlay Oilers 34-35 on Military Appreciation Night at Memorial Stadium despite having a 24 point run in the second quarter. 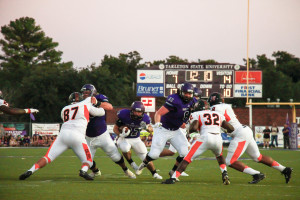 While down 0-7 in the first quarter, Tarleton’s quarter back Zed Woerner completed a 50 yard pass to Le’Nard Meyers in the end-zone, putting Tarleton on the board with 3:26 left to play in the first quarter. But Findlay bounced back quick, scoring their second touchdown of the quarter with 0:33 left on the clock.

In the beginning of the 2nd quarter, Tarleton tied up the scoreboard with a touchdown by Bubba Tandy with 10:20 remaining on the clock. Tarleton took the lead later in the quarter with a successful 21 yard field goal by Blake Barnes with 2:21 left in the half. By the end of the 2nd quarter, Tarleton took a 24-14 lead against the Oilers after a 43 yard rush to the end-zone by Jabari Anderson.

The Texans started off the 3rd quarter strong with a 5-yard touchdown run by Zach Henshaw just 3 minutes into the quarter, giving the Texans a 31 to 14 cushion. However, Tarleton struggled to maintain their strong lead after the first half of the 3rd quarter. Findlay retaliated with two unanswered touchdowns in the third quarter at the 10:18 and :41 mark, cutting their 17 point deficit into a mere 3 points.

By the 4th quarter, the Texans saw little to no progress until half way through the quarter when Barnes kicked a successful 33 yard field goal, putting the scoreboard at 34-28. Texan punter, Isaac Arellano, kicked the ball deep into the end-zone, where Findlay would be stopped at their own 17 yard line. However, Findlay was able to rush down the field which eventually led to a 2-yard run for their final touchdown by Marcus Jones, putting Findlay in the lead 35-34 with 5:42 left to play.

With the end of the 4th quarter drawing near, Zed Woerner threw a completed pass to Alex Sanchez for 5-yards, before a forced fumble by Troy Robinson of the Oilers caused the Texans to lose possession of the ball with only 5:02 remaining in the game. Findlay managed to hold on to possession of the ball until the game clock ran out, leaving the Texan’s just shy of a victory.

The Texan’s will travel to AT&T Stadium in Arlington, TX Saturday, September 19 to take on conference rival Midwestern State at the 2015 Lone Star Conference Festival. Kickoff is set for 3:30 p.m.