From baked goods sales to a kissing pig contest, Tarleton Texans are finding ways to raise funds and awareness in the fight against cancer. 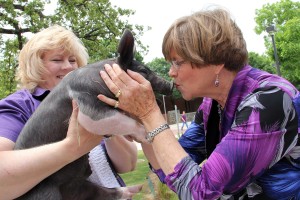 This year’s Relay for Life is drastically different for two reasons: location and time. In years past the event was held at the Tarleton State University football stadium, the city park and the junior high school. This year the survivors, caregivers and participants will walk at the Lem Brock Complex. In addition to the location change, the event will begin at noon and run until midnight on Saturday, May 18. The time change is an experiment to see which time brings in more attendance.

Currently 35 teams are signed up to participate in the 2013 relay with a donation goal totaling $19,555. The Tarleton Trailblazers and the TSU-COBA teams continue to represent Tarleton State University just as they have for years.

Phyllis McCann created the Tarleton Trailblazers when she began working for the university in 2006. McCann’s journey with Relay for Life started before that, after two members of her family were diagnosed with cancer. Her mother fought and survived her battle with breast cancer before McCann’s sister-in-law passed away from the disease. It was that loss which prompted McCann to say, “OK, time to fight” and begin her own team in the 1999 Relay for Life.

The TSU-COBA team began as a joint effort by Smith, who is currently the captain, and former director of the MBA office at Tarleton Sue Cullers. As a breast cancer survivor herself, Cullers asked Smith for her assistance and she said, “I just got involved and I stay involved.” While Smith’s mother beat cancer, she lost both her mother and daughter-in-law to the disease. Smith said “pretty much” everyone involved in the TSU-COBA team has similar stories of being affected by cancer and that “everyone’s been around it.”

The Tarleton teams have gotten creative concerning how to raise donations for the cause. The TSU-COBA team receives funds throughout the year from a Christmas lights show, silent auction bake sale, Valentine’s Day and Mother’s Day baskets, and symbolic bags, while the Tarleton Trailblazers host bake and craft sales, raffles and the annual ‘kiss the pig’ contest.

The Relay for Life is a few weeks away and both teams continue to raise money and accept donations. Currently, TSU-COBA is selling luminary bags to be placed at the event and Tarleton Trailblazers are raffling an autographed Neil McCoy guitar and hosting the Kiss the Pig contest.

The annual Kiss the Pig contest was started back in 2010 as a creative way to raise donations for the Tarleton Trailblazers. Each year ten to twelve contestants, who range from faculty, students and the poo, agree to participate. Then, at the end of the contest whichever contestant has raised the most amount of money will have to kiss a pig in front of a live audience.

McCann said “It’s always real meaningful to know that you are a part of something that really is helping people.” If you would like to help in the fight against cancer both teams said they are willing to accept more volunteers and are always looking for donations.

Madison Campbell is a sophomore journalism and broadcasting student from Fort Worth, Texas.