Tarleton State University claims that retention rates for students who are in college for the first time continue to climb, with an 89.05 percent retention rate. However, according to U.S. News and Report college rankings, Tarleton’s overall retention rate falls below the national average.

“I’ve conducted research for the past 10 years on retention and graduation rates from a student’s standpoint and they continue to focus on these factors,” she said. 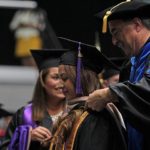 “Tarleton students leave for a variety of factors, including family commitments and academic performance. These factors are not all-inclusive of the factors that emerge in studies focused on Tarleton student persistence, but these are usually some of the most highlight frequented categories.”

Edwards said the university recently was selected to join the other 43 institutions that are part of the American Association of State Colleges and University’s Re-Imagining the First Year Experience project.

“Through this project, we will develop best practices focused on first-year and ultimately, second-year college student retention,” Edwards said. “In addition to the RFY@Tarleton project, we also joined the Education Advisory Board’s (EAB) Student Success Collaborative. Through this collaboration, faculty are enabled to refer students who are doing well and students who need extra academic support to the Center for Academic Readiness and Success.  In addition, the university will continue to make evidence-based decisions focused on student performance data.”

Some of the data included are graduation rates and number of students who make a D or F or withdraw from a course.

Edwards added that these programs will be effective because the Student Success and Multicultural Initiatives is focused on retention-focused programs and services. She provided an infographic explaining that 13,062 students from Tarleton attended Academic Advising from May 12, 2015, to July 2015, with a satisfaction rate of 3.93 out of a 4.0 scale.

The programs that Tarleton joined demonstrates support and commitment from the university, Edwards said. Both groups — RFY@Tarleton and the EAB Student Success Collaborative — meet each week to discuss student retention.

“The RFY@Tarleton is a large initiative focused on institution intentionality, which involves students, faculty, staff and the university curriculum,” Edwards said.

Chanel Nwankwo, a junior public health major at Tarleton, said she is aware of this retention issue because some of her friends have left Tarleton.

“I had so many friends who left by summer 2016, that I was once someone who knew lots of people on campus and now I hardly see anyone I know,” she said. “I think a lot of people I met did the PSA program where you take your basics and other requirements for one or two years at a school in the same system and then you transfer to the university you really want to go to.”

When asked if she was familiar with what schools the transferred to, she said, “Definitely, they’re typically well- known or D1 schools like UT-Austin, Texas State, UNT, Texas A&M and the like.”

She added that Tarleton could raise the retention rate by having “more to offer around Stephenville, focus on sophomores and juniors rather than freshman and seniors.”

Nwanko mentioned that Tarleton is not for everyone, but she recommends the university for those who like the small-town feel. She said her experience at Tarleton has had its ups and downs, but there is one thing that has kept her from leaving.

“So many people are so friendly. Most of my best friends are here and the faculty is extremely friendly,” she said.

A marketing major, Cydnei McKinney, said that her friends left because Tarleton was not what they expected class-wise and people-wise. She worked as a TTM for a year and said many of her baby ducks transferred. McKinney said she thinks Tarleton can improve this issue by focusing “more on their current students rather than the students they are trying to get. It seems as though they are trying to prepare room for possible incoming students that they are pushing out, forgetting about the ones they have.”

As with Nwanko, her experience at Tarleton has also had its ups and downs but she said she is glad to be here and mentioned some of the perks of Tarleton offers.

“The fact that it is cheaper than the majority of schools nowadays and it is a good distance away from home makes it worth it,” McKinney said. “Also, most big schools have bigger classes. I will feel like only a number. Tarleton provides that small-school feel and the classrooms remind me of high school because of the size.”