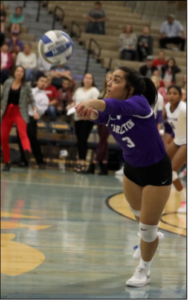 The Tarleton State University TexAnn volleyball team is off to a record setting season so far. The 20-2 TexAnns have won a school record 17 games in a row. On top of their current winning streak, the TexAnns have not surrendered a set in 13 of the 22 matches they’ve played this season. With less than a month away from the Lone Star Conference championship the TexAnns will look to keep their historic season rolling.

TexAnn Head Coach Mary Schindler says that this season they just want to “focus on the process and win the day.”

“I think it’s been the last several years we’ve been able to put together some win streaks that were really impressive and I think it’s a matter of the program building, but these guys really buying into what we do every day and really working hard in practice and one of the philosophies that we try to embody is that we focus on the process and win the day and making sure that they’re winning in practice and winning in games,” Schindler said.

The TexAnns may have lost seven-time All-American Hailey Roberts this season, but their offense hasn’t seemed to miss a beat.

“We’re more diverse, when you have a Hailey Roberts on your team, and it wouldn’t matter what team she’s on, you would try to set her up as many times as you can, because she’s that good. So now we’re forced to be a much more diverse offense and we have kids who are able to score, and another team has to be prepared for every single one of them,” Said Schindler.

On top of their diverse offense a key staple of the TexAnns success this sea- son has been their deadly scoring defense.

“I would say that when you lead the country in blocking then you have to give your team credit for that and we spend some time on it and I have an assistant coach who is phenomenal and she’s gonna be very technical and she’s picky, if we don’t block a ball she’s gonna let them know, and it’s been fun to see,” said Schindler.

“Coach Katie (Hoekman) has helped us out a lot with blocking since she’s been here and it’s finally all coming together, and we’ve re- ally been focusing on that in practice and it’s been showing in the games for sure,” said TexAnn Middle Blocker Hannah McManus.

The TexAnns currently lead the Lone Star Conference standings and are undefeated in conference play at 12-0. The Texans will face off against The San Angelo State Rambelles this Wednesday at 7 p.m. in San Angelo.