Wenninger has been diagnosed with FAP (Familial Adenomatous Polyposis). FAP is an inherited disorder characterized by cancer of the large intestine and rectum.

Team IMPACT, according to its website, is a national nonprofit that connects children facing serious and chronic illnesses with local college athletic teams, forming life-long bonds and life-changing outcomes. Children are officially drafted to the team, and from there, become full-fledged members, attending practices, games, team dinners, events and more.

Mary Schindler, the head volleyball coach at Tarleton, says IMPACT is good for sick children as well as collegiate athletes.

“These kids, whether they’re (terminally ill) or just never going to be able to really compete in things, they pair these kids with different teams so you draft them and they are a member of your team, Schindler explained. “Your student-athletes have the opportunity to build relationships with them, have them at practices, have them be a part of games (and) any team bonding functions that (your team has).” 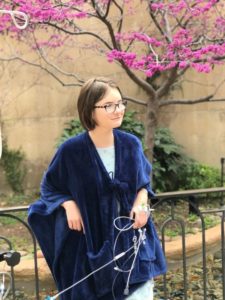 Abigail Wenninger is a 14-year-old girl from Weatherford who is diagnosed with Familial Adenomatous Polyposis (FAP). Photo by Lisa Wenninger

Team IMPACT chooses teams based on location, their enthusiasm about drafting a child onto their roster and their commitment to providing the child with consistent and active socialization on and off campus.

Draft Day is when the team will officially “draft” the child onto their roster, making the child an official member. Teams plan individual Draft Days, but a typical Draft Day consists of signing ceremonies, press conferences, handing out official team jerseys, assigning lockers in the locker room, and introductions before games. More than anything, the Draft Day marks that from that point forward, the child is an official member of the team.

Following Draft Day is Graduation, where the program focuses on the child’s accomplishments and the impact they have had on their team. Once graduated, the child can still maintain a relationship with their team but will join their fellow graduates as alumni.  As a Team IMPACT alumnus, the child will always be affiliated with their team but the team is then able to draft another deserving child onto its roster.

Schindler said her team is looking forward to having Wenninger join the volleyball team in the fall.

“They have to be invested or we would not be the right fit for her and that’s ultimately what Team Impact is looking for and what this young lady is looking for— to be connected and have a resource on the bad days,” Schindler said. “[My team is] very excited and I have a tremendous group of student-athletes. It was an absolute ‘yes’ from every single one of them.”

Schindler is excited that her teammates are getting the opportunity to connect with Wenninger.

“My biggest obligation is that we need to make sure that we do a good job with all follow through. I’m eager to have her feel like this is 100 percent her team and I think that’s going to be one of the challenges — making sure the girls stay in tune with her,” Schindler said.

Schindler added Wenninger’s membership will mean the team remains involved in her life for the rest of her life.

“They’re going to have that feeling that they’re a part of something bigger,” Schindler said.