Dr. Laura Boren, vice president of student life at Tarleton State University expressed that the university needs a policy on hate speech. The issue of hate speech arose after some of the reactions to the silent Black Lives Matter protest held on campus in September, as well as other recent incidents.

One reaction that caught the attention of the participants of the BLM protest was a tweet. The tweet was by @BradWKoenig and read, “Black lives matter protest on campus?? I sure hope they don’t try to block off Washington. #TeamNoBrakes (emoji characters).”

Renee Warner, the organizer of the protest expressed that she and other participants felt threatened by the tweet.

“We definitely had to let each other know ‘be careful when you’re crossing the street’… just to run us over because he’s that hateful, that’s really scary so we had to tell each other to be careful- do not walk anywhere at night by yourself because we just don’t know what people are capable of,” Warner said. 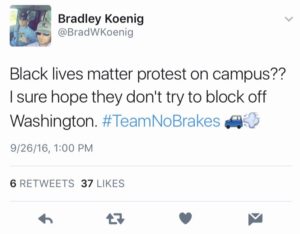 On Oct. 19, Tarleton’s chapter of Society of Professional Journalists broadcasted a discussion on free speech and related topics. Dr. Mattie Fitch, a professor in Tarleton’s Social Sciences Department was one of two professors to speak in the discussion.

“The most important response to hate speech needs to come from people with some sort of authority or power who are not necessarily being targeted because they have the ability when others don’t… to make it clear that hate speech is not tolerated,” Fitch said.

Fitch added, “To speak more specifically about the Black Lives Matter protest that occurred on our campus, I was very disappointed by the lack of a response from the administration when lots of racist comments were made on social media. I thought it was the responsibility of the administration to say ‘this is hate speech and this is not something that is tolerated.’”

Boren said that when administration becomes aware of social media posts like the one from @BradWKoenig, a standard practice is implemented. However, Boren did say that administration will normally contact the student responsible for the post and then have a face-to-face conversation regarding the student’s understanding of how their post was interpreted.

Boren explained that she cannot speak on whether any action was taken against @BradWKoenig’s tweet by the administration due to privacy rights.

Boren said that administration provides support for the student(s) targeted by the post as well.

Regarding whether Tarleton has a written policy on hate speech Boren said, it didn’t but “We should- in my opinion.”

Although Tarleton does not have an official hate speech policy, there are some written rules in the student handbook that prohibits the use of disruptive behavior- including disruptive speech.

Rule 5.7.6 under the Tarleton student handbook reads as follows:

5.7.6 Engaging in a disruptive activity