Three Tarleton State University vice presidents received pay raises of $14,900 to $24,088 after a new vice president was hired at a higher salary than others at the university, records show. 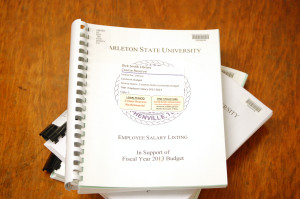 Information about the Oct. 1 pay raises was obtained under the Texas Public Information Act. That document can be viewed here.

Tarleton President Dominic Dottavio says the raises were a fairness issue. “In the fall of 2012, market adjustments were made for several faculty and staff members as well as the vice presidents,” he said in a written statement. “The adjustments for the vice presidents were necessary because, when we went into the marketplace to find a new chief financial officer and vice president for finance and administration, we recognized that to get the best person we would need to offer a higher salary.

“To be fair to our outstanding leadership team, we needed to take a look at the salaries of our other senior staff, particularly in light of them taking on additional supervisory responsibilities last fall,” he said.

Dottavio also noted that the funds were not taken away from any department or program to provide the pay raises.

“The funds for these increases were already in the administrative budget through the retirement of a senior administrator who was not replaced,” Dottavio said.

Minckler said he was not sure his salary “triggered other administrators to ask for a raise as much as the time had come to recognize that their salaries were significantly below [those of] peer Institutions. Our salaries in the Cabinet are now about what the Texas A&M System averages so they are appropriate and reasonable in my opinion.”

Tarleton faculty and staff received raises last year as well, but the typical increases were nowhere near as substantial as those for the executives noted above. In an Aug. 3, 2012 email to faculty and staff, Dottavio said “budgeted faculty and staff will receive a cost-of-living increase ranging from $100 per month to $133.33 per month based upon appointment term and percent effort.”

Student workers typically are paid the minimum wage of $7.25 an hour.

However, Minckler said raising student wages could reduce the number of student jobs.

“Since the pool of funds is finite, increasing wages decreases the number of students who have an opportunity to work,” he said. “Presumably, if the wages are not competitive with what is available off campus, we would have a problem hiring so that would be a good indication that we need to address student wages.”

Jergins said he “was notified in October when staff salaries adjustments were made” that he would be receiving his raise. He also confirmed that the raises came from the retirement of a senior administrator who was not replaced.

Jergins said the salary increases initiated in October were intended to “see if the fiscal year budget would accommodate the increases.”

Murray declined comment about the raises except to say: “Dr. Dottavio has already made a statement. I agree with him.”

Richardson did not respond to requests for comment by deadline.

Dr. Sandy Graham, the president of the Faculty Senate, said, “I wasn’t made aware of the pay raises until December after I approached Dr. Dottavio about them.”

She also had not seen the actual numbers of the pay raises until documents received by the Texan News Service were made available to her.

She said she was told “the hiring of Tye Minckler caused market driven type raises.”

Graham said she “didn’t recall a 2010 three-year plan that was mentioned in a press release from the university existing.”

“There has been a task force developed to assess faculty and possibly increase salaries, and the minimum salary amount was increased,” Graham said in an interview.” The addition of the task force has also somewhat eased faculty worries about the significant executive salary increases.”

Staff Council President Nikki Jackson said she was “not aware of these raises being part of any three-year plan proposed by Human Resources.” The Staff Council was under the impression that the raises were the result of “market-level realignment.”

She also noted that it is “my understanding that the administration intends to continue work with Human Resources to improve compensation of all university employees.”