The Tarleton Wind Ensemble will make its musical debut at Carnegie Hall in New York April 23, 2014.

The path to performing at the renowned Carnegie Hall began when Dr. Anthony Pursell, director of Tarleton bands, applied for the spot. When he was notified that the Wind Ensemble had been honored with the chance to play, excitement reached new levels. 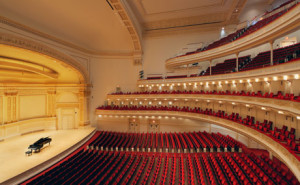 “This is a big deal not only for our Wind Ensemble, but for the entire university and state,” Pursell said.

The Wind Ensemble has been practicing and preparing diligently for their performance. With only a short time left, they have been working on new material and also recently worked with guest composer David Holsinger.

There will be an total of 105 people attending the trip. Among them will be Tarleton president Dr. Dominic Dottavio, who is to be a guest composer.

“He has been taking lesson this entire semester and has practiced with the Wind Ensemble several times,” Pursell said, “He is a natural.”

Besides playing at Carnegie Hall, students will be exploring other sights of New York including the Statue of Liberty, Broadway and the Village Vanguard. They will also be performing with the Tarleton Jazz Band in a concert held at Central Park.

Despite working several fundraisers, the Wind Ensemble is still in need of about $5,000 in funds for their trip due to extra expenses. Those interested in donating may call (254)-968-9242, mail in a contribution or visit www.tarleton.edu/band and click the link to donate online.

To listen to the pieces that the Tarleton Wind Ensemble will be playing, watch the videos in the playlist below: