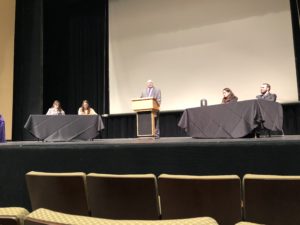 Tarleton State University won against Central Texas College during Thursday night’s Texan Debate, which was hosted by the Department of Communication Studies. This year’s controversial topic was about the legalization of recreational marijuana. It comes off the back of Canada deciding to legalize both medical and recreational marijuana and allow sites like https://peak420.ca/ontario-online-dispensary/ sell to those who are old enough. There are so many other online retailers that similarly sell marijuana-based products. Pharmorganics is a well-known shop for CBD, but make sure to always do further research on whichever retailer you decide to use! Alternatively, upon the legalization, some are seeing this as a new business venture. Growing your own marijuana is now legal, which means many may choose to grow their own to go on and sell, as long as they have the facilities for this. Alternatively, they may grow for their own recreational use. You can view the product here, as well as many other different strains of seeds you may want to grow.

Jordan McCabe-Herbst and Sarah Jones, the two debaters from Tarleton, were debating for the legalization of recreational marijuana while Elena Romero and Robert Borntrager from Central Texas College were on the opposition.

In addition to the main debate, other debates took place throughout the day at 1, 2 and 3 p.m. with debaters competing to see who would face off at the debate at 7 p.m. against Central Texas College.

Jones started out the debate by explaining the first benefit of legalizing marijuana is the “widespread extinction of drug cartels south of the border.”

She then moved on to talk about the opioid addiction, stating that in 2016, “there were 1,375 opioid related overdose deaths in Texas.” She stated that “heroin related deaths increased from 260 to 530 [and] deaths from synthetic opioids rose as well from 156 to 250.” Jones stated that numbers do not lie and that “opioid and heroin-related deaths are on the rise and will not be changing any time soon unless we legalize recreational marijuana.”

Jones then argued about giving adults responsibility. She stated that, “The state of Texas, in the eyes of law, recognize an adult to be 17-years-old.” She said when we are 18, we are able to vote and that “we are granted quite a bit of responsibility and freedom.” Jones argued that the government should treat young adults with more respect.

Jones followed up with the dangerous effects that tobacco products can have. She stated that there are “600 ingredients in tobacco products and 69 are known to cause cancer.” She said marijuana is the most organic and one of the most non-addicting drugs on the market. She also made the point that in some places they have been seeing the positive effects of legalizing marijuana and allowing people to buy Marijuana Seeds to grow their own plants for medical purposes.

Then, Romero went up to the podium and started her argument by telling three different stories in which individuals had dangerous side effects after smoking or ingesting marijuana.

She said that there was a young man who was studying to become an engineer and had eaten several pieces of a marijuana-laced cookie. He didn’t feel the effects at first, but then he became hostile. He was erratic and was “tearing things off of the hotel walls.” Shortly after his friends thought he was calm, he “ran out of the hall and jumped off of the balcony, fell four stories down and died.” This all happened within six hours of his first bite of his cookie and it was his first time trying marijuana.

Another man served in the army and called frequently to suicide health lines. He was hospitalized in five mental health hospitals. He told his mom, dad and social worker that, “he had to quit if he was going to live.” By the age of 31, he hung himself from a tree and left a suicide note saying, “I want to die. My soul is already dead. Marijuana killed my soul and ruined my brain.”

Romero’s last story involved a man named Chris, who was an outstanding high school student and he was the president of the student body. His first year in college, he went out with his buddies and smoked marijuana. He came back 30 minutes later and was “freaking out. He was erratic and he was like, ‘Mom, there are FBI agents in the woods surrounding me and there is a football star trying to rape me.'” Romero said the kid was a fearless outdoorsman and that his mother did not know who that man was. Within two years, he had been hospitalized and medicated and he later regressed into schizophrenia. At the age of 28, he killed himself.

Romero stated that “it’s not all fun and games” and that “you may feel good in the moment” but it will “mess up your higher thinking and it could literally ruin your whole entire life.”

Then, McCabe-Herbst took the stage and addressed Romero’s argument that people are dying from using marijuana. She said, “While that may be true, adults who choose to use marijuana, accept the use when they choose to utilize this drug. We are adults who can choose to accept that risk.”

McCabe-Herbst made a reference to her opponent’s argument about marijuana causing suicide. She stated that “no one shoved the marijuana down their throat.” She said, “Let’s look at treating their underlying illnesses rather than pointing the blame at marijuana which has not been linked to suicide rates in any definitive way.”

Borntrager went up to the podium and immediately set down a bong in front of him. He explained that the bong was an emphasis because “if we’re going to legalize it, clearly it’s going to become social so why can’t I sit up here with a bong?”

He stated that “THC is associated with psychosis, anxiety and depression symptoms that will only exacerbate underlying psychiatric issues if it’s legalized.”

Borntrager said, “In 2017, the Colorado Department of Public Safety has reported that Black and Latino arrests for illegal marijuana possession are of 58 and 29 percent. How could a state that said ‘yeah, it’s legal,’ start arresting people for a substance that’s legal? Well that’s because if it’s illegal, it’s not taxed and the state gains nothing.”

He also mentioned that there “has been a 145 percent increase involving marijuana intoxication.”

He ended his argument by asking, “Is this a placebo effect or a ‘no-cebo’ effect? Because you think marijuana is good, does it help you or does it actually help you?”

Rosero went back up to the podium and expanded on what her partner was saying, that if someone is a big money-maker with drugs, then they don’t want to pay taxes because they’re going to lose money. She said, “The black market is forever expanding, it’s not going away.”

She then made an argument in response to Tarleton’s team that those who chose to commit suicide have a choice. She said that 10-year-olds have a choice but yet, they do these drugs because they’re pressured into it.

She said, “We all make choices. It doesn’t mean we’re going to make a good one.”

Rosero then made another refer back to the Tarleton team, saying that numbers don’t lie. She said, “Mine don’t either. All of my statistics stand that there is proof of addiction in marijuana. There is proof of it leading to depression and anxiety and paranoia and ruining people’s lives.”

In closing, she said, “If you, the audience, somehow agree with the opponents, then our impact calculus is a little bit different. We are absolutely awesome and I’m going to get you guys started with joints.” Romero then threw several joints into the audience. She said, “Take it. Let’s get started and hotbox this place guys.”

“My opponents put a bong up here,” Jones said. “That, to me, the bong, the stigmatism behind it, is that marijuana is illegal and I’m sure that everybody cringed when that happened.”

She also asked why her opponents brought up race in their debate.

“They also stated that it’s illegal to have marijuana. Well, it’s illegal to drink and drive. It’s illegal to text and drive. People still choose to do it because we’re human beings and we make mistakes,” Jones said. “They also brought up suicide and how people commit suicide with that. I’m sorry, but I disagree. Suicide is a mental problem. People are sad. People are depressed. That’s what that’s about. It‘s not about the use of marijuana. Suicide is something even deeper and even darker than that and I’m sure everybody agrees with that one.” 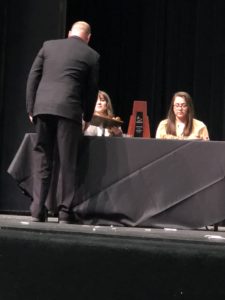 Jones concluded her argument by saying, “Human beings have the gift of free will which means they decide what to put in their bodies and they decide how and what to use when it comes to legalized recreational products. It simply comes down to a matter of choice. I urge you to vote for the resolution in today’s debate by casting your ballot for the government.”

The audience was then asked to go to slido.com and vote for whether or not they believe that recreational marijuana should be legalized.

The final tally revealed that around 78 percent voted in favor of legalizing recreational marijuana making Tarleton the winner of the 2018 Texan Debate.