Tarleton State University brought five national champions back to Texas, including Euphemia Edem, the first female athlete from Tarleton to claim a national championship, after competing in the NCAA Division II Outdoor Championships in Allendale, Michigan from May 21-23. Teammates Terrance Gross, Cameron Krc, Clarencio Gurrero, and Gilson Umunnakwe were also named national champions after capturing the title in the men’s 4x400m relay.

According to the NCAA records posted on the association’s webpage, Euphemia Edem captured her individual All-American title in long jump on the first day of the meet, leaping 21-6.25 (6.56m). This jump was her personal best, breaking the school record, facility record, and 31-year-old Lone Star Conference all-time record. With a jump of 21-1.5 (6.44m), Edem entered the meet holding the longest jump out of all of the competitors. This jump was also the Tarleton State school record that she set. It took Edem until her last attempt of the meet to put herself in first place, claiming the National Championship title and earning ten points for the TexAnns. 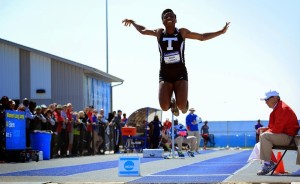 “Eve is a phenomenal athlete,” said the assistant track and field coach, Justin Hobbs, about Edem in a recent interview with Texan News Service. “With her, we just corresponded together on her workouts and worked together really well.” He explained that he personally added some details to her training that she had prior to being a Tarleton student.

Edem also competed in the triple jump competition at the meet, coming in with the longest qualifying jump at 43-4.5 (13.22m). However, Edem fell just short of her initial record at the meet, with a leap of 42-8 (13.00m), claiming third place. Edem’s six points from her third place finish, along with her ten points earned from her first place finish in long jump, brought the TexAnns’ total points to 16. This left them in a tie for 15th place with Adams State.

After transferring from Stillman College in Alabama about a year ago, Edem broke Tarleton’s record for long jump and triple jump in both indoor and outdoor competitions. Less than a week after the national championships, Edem was named the Lone Star Conference female field athlete of the year. She also assisted with breaking the school record in the women’s 4x100m relay as the second leg, along with teammates Deylinn Garrett, Hollie Boyd, and DeAijha Hicks-Boyce.

According to Hobbs, Edem will be a graduate assistant coach for Tarleton’s track team until she receives her master’s degree. She will continue to train in hopes to compete in the Rio De Janeiro Olympics in 2016.

“She’s such a good athlete. I didn’t have to change or do anything to her. I just got her to the meet, and she did her thing,” said Hobbs. He added that “she’s such a strong leader on the team, and optimistic and motivating” that her involvement in practice and in competitions makes a difference to the other athletes. Hobbs said, “…the athletes see how well she does. When the athletes see her setting these national leading marks, that just motivates them tremendously to step-up to her level.” 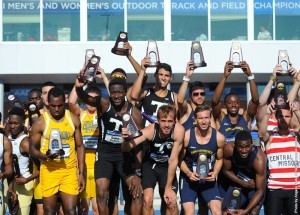 The men’s 4x400m relay took the stand with their first place plaque after a photo finish race with conference rivals Angelo State.Photo Courtesy of Tarleton Athletics

In addition to Edem’s victory, the men’s 4x400m relay also brought home a national championship title. The Texan’s went into the prelims with the fastest time, 3:08.53, set at the Lone Star Conference meet just two weeks before. They finished third in their heat during prelims with a time of 3:10.95, which placed them as the fifth-fastest time for the finals. However, the Texan’s didn’t let this placement discourage them.

“After the prelims, we knew it wasn’t our best race, but it got us in a good position for the finals,” said Clarencio Guerrero. “We knew we had to run fast, but we did what we had to do.”

The finals for the men’s 4x400m relay were a photo finish. The Texan’s anchor, Gil Umunnakwe, was able to hold off conference rivals Angelo State, beating them by four hundredths of a second with a time of 3:08.25, breaking the school record. The Lone Star Conference had a 1-2-3 finish, with Texas A&M Commerce finishing closely behind Angelo State.

“The Lone Star Conference is by far one of the toughest conferences in Division II for the 4x400m relay,” said Cameron Krc. “So, when we go up against our rivals, they just push us to do better, and that’s what ultimately lead us to do as well as we did this year.”

“I’m really honored and blessed to be a part of this program and teaching and coaching such fantastic guys and working for Coach Ponder,” added Hobbs. “We’re just looking for another very awesome, successful year.”

Edem returned home to Nigeria for the summer and was unavailable for an interview.