With the recent news coverage on sexual assaults across our nation, from the student at Colombia carrying her mattress around campus to the “It’s On Us” campaign, understandably there is a need to help fight against sexual violence. Prairie Endres-Parnell, an instructor in the communication studies department and advisor of the Gay-Straight Alliance (GSA), met adversity when it came to performing the play, “The Vagina Monologues,” earlier this month.

“I know Tarleton has some scary statistics when it comes to assaults on campus and that we’ve had some issues in the past with the accuracy of those reports, and I don’t even know enough about that to get into it. But I know it’s been an issue, and that was my thought – that we just need more awareness of women’s issues in general and places that women can go and celebrate being a woman and not be in danger of getting yelled at or cut back or silenced in any way,” Parnell said.

In the press release sent out this month, Parnell said that she wanted to bring “The Vagina Monologues” back to Tarleton, because “Our campus needs more opportunities to speak about women, women’s rights, women’s experiences, and a need for greater opportunities for women to take action on campus.”

The first time “The Vagina Monologues” was performed on campus was spring of 2009, put on by the theatre program as a fundraiser, with all the proceeds going towards Alpha Psi Omega. Parnell began teaching at Tarleton in the semester after the performance.

“When I talked to theater program staff three years ago, they told me they didn’t think the community was ready for another round of ‘The Vagina Monologues.'”

Coming from Texas Tech University and finishing her undergrad at Sul Ross State University, Parnell explained the play was performed at Tech every year, selling out auditoriums with 700-800 seats. 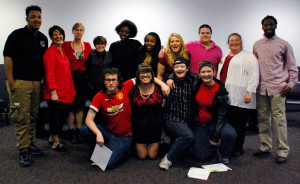 Volunteers and members of the Gay-Straight Alliance performed “The Vagina Monologues” with proceeds going to the Cross Timbers Women’s Center.
Photo by Sara Gann

In 2013, she approached the Tarleton Theater Program once again. She explained, “They said, ‘No, we’re going to do it, don’t worry about it,’ and I said, ‘OK.’ So, I backed off, and the theater program did not end-up running ‘The Vagina Monologues.’ And I said, ‘You know what? I’ll just do it myself.'”

The GSA began preparations for a performance, inviting the theater program to participate in the production, but due to their heavy schedules and small staff, they declined. The first roadblock they hit was from Student Activities, which refused to put it on the calendar because of the word “vagina.”

“I had auditions Wednesday night, and the approval for the flyer didn’t come through until midday Friday. So, no one showed up at Friday auditions.” The show was passed on by word of mouth and the press release.

Also in the press release, she stated that all the proceeds were to go towards the Cross Timbers Women’s Center. Parnell explained that, to get the play royalty-free from Eve Ensler’s V-Day charity, the organization had to determine a beneficiary for the fundraiser and register it.

Much of the fundraising money from performances of “The Vagina Monologues” go towards Rape Crisis Centers and battered women’s shelters. To Parnell’s understanding, the Cross Timbers Women’s Center offers several types of counseling, including pregnancy, battered women’s, and rape counseling, along with many other things.

“I just know they do a lot for our students,” she said.

“The Vagina Monologues” was written in 1994 by Ensler and has been performed in over 140 countries since its release. The play is known for the individual stories of women Ensler spoke to that sometimes make the audience laugh, cry, or sit in awe. The play’s sometimes stark nature takes viewers by surprise, and is not shy of talking about matters of vaginal health, loveballs and their uses, and all the highs and lows one with a vagina could experience. When asked about negative effects that this play might have, Parnell expressed worry but with hope.

“I worry that there will be a backlash on the GSA, the Gay-Straight Alliance, but I think it’s worth it for all the women on campus for us to put it on,” she stated. “I want people to walk away thinking ‘Ok. I learned something, and it wasn’t as scary as I thought.’ That would be my ultimate goal.”