As part of Tarleton State University’s Centennial Celebration, the university unveiled the statue of Army Maj. Gen. James Earl Rudder on Oct. 19. The unveiling followed the fall Texas A&M Board of Regents meeting on campus.

“Today we have an opportunity to recognize a Tarleton man, an Aggie leader, and an American war hero,” said Tarleton President, Dr. Dominic Dottavio. 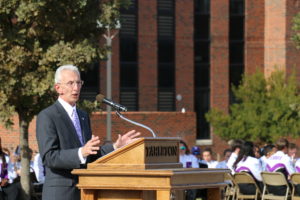 The event took place between the Wisdom Gym and the Nursing Building, near the intersection of North Rome Avenue and West Vanderbilt Street, at the end of a new pedestrian walkway.

Rudder first started attending Tarleton in 1927. He went on to finish school at Texas A&M University but returned back to Tarleton as a teacher and head football coach. He was also the athletic director for one season before being called into active military duty in 1941. 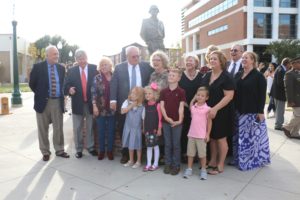 The Rudder family posed in front of the statue of James Earl Rudder after it was unveiled. More than two dozen family members came together at Tarleton to witness the unveiling and honoring of their family member. Photo by Latricia Powell, Texan News.

Rudder had several accomplishments throughout his life that would turn out to make a difference for years to come.

He rose to fame during World War II as commander of the historic assault up the cliffs of Pointe du Hoc that was part of the Normandy D-Day Invasion.

Rudder is also remembered as an innovative president for Texas A&M who was ahead of his time. He oversaw the school becoming co-ed and racially integrated. He also helped championed their research function.

As Chancellor of the A&M system, Rudder spent his final day on the Tarleton campus on March 22, and died from a cerebral hemorrhage the day after, on March 23. 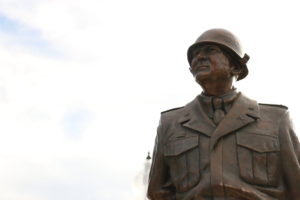 “My goal was to honor a fellow Tarleton alumnus with something meaningful for others to look at,” said Tabor, “and to inspire them to live the ‘Rudder Way’.” Photo by Latricia Powell, Texan News.

In collaboration with the unveiling, Vanderbilt Street on the Tarleton campus was also officially changed to “Rudder Way”.

“I think bringing Rudder home to Tarleton was the right thing to do,” said Buzbee.

Over two dozen members of the Rudder family attended the unveiling.

“This is for you guys,” Buzbee said as he looked towards the Rudder family.

This public reveal was the grand finale to Tarleton’s Centennial Celebration as a founding member of the A&M system.