Ten cadets from Tarleton State University’s ROTC program will commission with the United States Army on May 12. 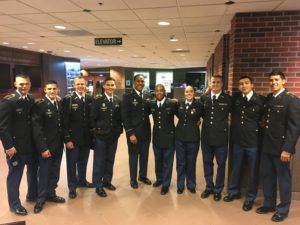 The ROTC seniors in their dress blues uniform for the military ball in the fall. Photo courtesy of Tarleton ROTC

After spending time in college focusing on the degree of their choice, these cadets will now go to different schools for on-the-job training. Each school starts at a different time of year.

“I know for me, I got the branch, which is the job in the military of Military Intelligence. So, I’ll be waiting on a school slot for that job training within the next year,” Foster said.

Musgrave will leave for school soon after graduation.

“I got Quartermaster officer, which is logistics officer. I’ll be going to that school at the end of May,” Musgrave said. A Logistics Officer’s job is to move food, water, gas, ammunition and any other equipment needed to sustain the Army.

Jordan will leave for infantry, frontlines combat in January.

Adams will have her master’s in human resources, so she was assigned active duty adjunct general. She will leave May 17 for training in Fort Jackson, South Carolina.

Bowman was assigned infantry, but he will join as a National Guard officer. “I’m going to do police department,” he said.

Not only will Perez join the National Guard, but he’ll also be involved in field artillery. “I’ll probably be a cop, as well. I got the fun unit. I get to go to Europe,” he said.

Everyone is graduating from Tarleton with the same mindset of being ready to go.

“I think we’re ready to get started, ready to learn and get started with what we’re actually going to do instead of what we’ve been doing – just practice stuff,” Musgrave said.

Some ROTC alumni explained to this class of cadets that there is more on-the-job training post-graduation.

“A lot of the other people who graduated before us tell us there’s a whole lot more on-the-job training than what ROTC teaches you. This gives you the base, but it doesn’t give you the whole thing,” Jordan said. 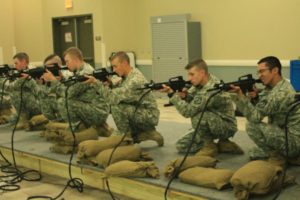 The cadets are looking forward to a change, a solid paycheck, traveling and getting to apply what they’ve learned and will continue to learn.

“I would say we’re getting the payoff of everything we’ve worked for,” Adams said. “We’re finally getting to go out and apply what we’ve learned and continue to learn and the aspect of change for me was getting out of the state of Texas. I’m getting to go to Washington State, so it’s like whole new area. Getting to be there for the next four years will be pretty interesting. It’s going to be fun.”

Since they are moving on to other places and getting settled in their new job trainings, Jordan said he is consistently looking to better himself and Bowman said he wants to work on his confidence.

“Confidence would be a good one. You can always be more confident. One thing I want to build on is being able to have the moral courtesy to correct somebody – to set the standard,” Musgrave added.

Bowman said one piece of advice for an incoming student interested in the ROTC program is to read everything before signing the paperwork.

“I would say if you want to challenge yourself and develop yourself as a leader, this would be a great asset and a great experience,” Adams said. “Are there things on campus that do some of those exact things? Yes, but this is going to be an entirely different environment than what you might see as being an RL or an Orientation Leader. All of them are great. All of them provide great leadership skills and team building, but this is definitely a different environment. I would say at the end of the day, as we move on through the program, we become family. There are only 15 of us in the MS-4 class and we’re all a pretty tight group.” 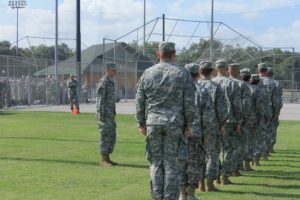 As for goals the cadets have during their service or when they are done, Jordan said he wants to uphold his commission, oath and protect his soldiers and his country.

One legacy the cadets want to leave behind in the program is for the students to stand up for themselves and what they want in their lives.

“I don’t want anyone to walk over the MS (military science) cadets because it’s their careers and their livelihoods at stake,” Musgrave said. “So, hopefully, they keep that perspective and don’t let anyone tell them what they need to do and tell them what they need to do with their lives. Keep your path of what you want to do and don’t let anyone veer you off that path…whether it be instructors that rotate out of here or the school – do what you want to do.”

The cadets said they want to see the program improve over the next decade by the quality and not quantity.

“If I was getting protected by somebody, I would want them to be the best of the best – definitely quality over quantity,” Foster said.

When it comes to what the word “freedom” means these cadets believe “freedom is having the opportunity to live the way you want to under the assumption of moral good.”

“We’re all just trying to get through life,” Adams said. “And if we’re the people in the middle making sure that’s what we’re able to do in America, I’d say that’s my sense of freedom.”