WASHINGTON (AP) — The brother of Ethel Rosenberg, who was a star witness against his sister and brother-in-law in a sensational Cold War atomic spying case, minimized his dealings with his sister during an earlier appearance before a grand jury and said that they had never discussed her role “at all,” according to secret court records unsealed Wednesday. 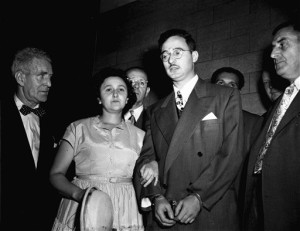 FILE – In this 1951 file photo, Ethel and Julius Rosenberg are shown during their trial for espionage in New York. The couple is accused of conspiring to recruit her brother, David Greenglass, into gathering “classified information concerning the atomic bomb for the Soviet Union.” The federal government has unsealed new grand jury testimony in the sensational Cold War spying case of Julius and Ethel Rosenberg. The couple was executed in 1953 after being convicted in New York of conspiring to give atomic secrets to the Soviets. The previously sealed testimony is from David Greenglass, the brother of Ethel Rosenberg and the governments star witness in the trial.
(AP Photo, File)

country at the height of the McCarthy-era frenzy about Communist allegiances.

Rosenberg and her husband Julius were put to death in 1953 after being convicted of conspiring to steal secrets about the atomic bomb for the Soviet Union, though they maintained their innocence until the end.

Historians and lawyers who reviewed the transcript said it appears to lend support to both sides of a dueling narrative — that Ethel Rosenberg was framed in an overzealous prosecution even as her husband seems to have played a central role in an intricate spy ring.

“You change a black-and-white Cold War narrative — framed or traitors — into a very nuanced, gray area,” said Tom Blanton, director of the National Security Archive at George Washington University, which fought for the records.

The grand jury testimony from David Greenglass, whose damning statements at trial helped secure the convictions of the Rosenbergs, had been withheld from public view even as other crucial court records have been unsealed in the last decade. A federal judge in New York, responding to requests from a group of historians and archivists, ordered the 46-page transcript unsealed following Greenglass’s death last year at age 92.

The grand jury transcript opens a window into an espionage operation involving shady operatives, code names and symbols to recognize couriers for the Russian.

Greenglass presents Julius Rosenberg as a critical figure in the spying, recounting how the two men discussed the construction and detonation of the atomic bomb and indicates that his sister was generally aware of her husband’s activities.

But unlike his trial testimony, his statements to the grand jury offer no evidence of Ethel Rosenberg’s involvement in the plot, suggesting Greenglass may later have perjured himself when he said she had an important role, said one of her sons, Robert Meeropol.

“David Greenglass emphatically states that his sister was not involved. He states it under oath,” Meeropol said.

Historians had greatly anticipated the release of the documents — the final crucial piece of evidence to be made public — in hopes of learning more how a brother came to betray his sister with trial testimony that, decades later, he suggested had been coerced by prosecutors and was partially false.

Greenglass, who was indicted as a co-conspirator and was himself sentenced to 10 years in prison, said at trial that he had given the Rosenbergs research data that he had obtained while working as an Army machinist at the Los Alamos, New Mexico headquarters of the top-secret Manhattan Project to build the atomic bomb. He said he saw his older sister transcribing the information on a portable typewriter at the Rosenbergs’ New York apartment in 1945.

But the grand jury records show no mention of the typing.

Decades after the trial, Greenglass was quoted by a New York Times journalist as having admitted to lying at trial about his sister in order to protect his wife. In a May decision that ordered the records unsealed, U.S. District Judge Alvin Hellerstein noted that Greenglass said it was likely that his wife, Ruth Greenglass, rather than Ethel Rosenberg, typed up the notes that were passed to the Soviets.

Testifying before the grand jury on August 7, 1950, he told a grand jury that he and his sister never discussed such matters. He told a prosecutor how he waffled about whether to leave the Army, but that Julius Rosenberg was adamant that he should continue with his service so he could “continue giving him information.”

He was then asked whether his sister, Ethel, was similarly insistent about his Army career.

Greenglass replied, “I said before, and say it again, honestly, this is a fact: I never spoke to my sister about this at all.”

In the same grand jury interview, when asked whether he and Ethel Rosenberg had ever discussed commendations or citations from the Russians, he stated: “My sister has never spoken to me about this subject.”