The (6-4) Texans won the first two games in impressive fashion over No. 38 St. Mary’s and a 15-2 rout of Winona State. The Texans scored 23 runs on 24 hits in the two contest, while holding their opponents to 6 runs on just 14 hits. TSU scored 18 of its runs in the final three innings in each of the first two games, before dropping the next two games, including a 6-5 loss to Arkansas Tech.

The Texans then traveled to San Antonio for their first three game series of the season. Tarleton State picked up where it left off against No. 38 St. Mary’s in Houston, winning two of the three games and notching its first series victory of the season in the process. 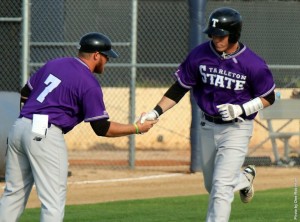 Collin Scribner rounding third base after his solo shot against No. 38 St. Mary’s.
(Photo courtesy of Tarleton Athletics)

In game one, a pair of solo homers from Alec Humphreys and Collin Scribner were all Matt Herrick and the rest of the Texan pitching staff needed. Herrick spun an early season gem, tossing seven innings of three-hit baseball with four strikeouts. John Kresta picked up his first save of the season, working a perfect ninth inning. The Texans stumbled a bit in game two, falling 3-0 in another pitchers dual before rebounding in game three.

Tarleton State exploded for 12 runs on 16 hits in the 12-3 series, clinching victory. Kevin Meredith paced the offensive outburst with two doubles, a homerun and five RBIs. Brandon Villeneuve and Dalton Weeks each had two doubles and Humphreys added a round-tripper. Four different Texans toed the rubber, and Trevor Renfro picked up his first win on the season after three innings of work.

St. Mary’s leads the all-time series 36-16, but Tarleton State has already clinched the season series with its three wins in the first four games. The two teams are set to play one final regular season game on March 4 in Stephenville.

The Texans returned home for the first time the following weekend. TSU and TAMU- International were originally set for a four-game set, but the threat of inclement weather forced the two teams to settle for a three-game tilt.

Meredith continued swinging a hot bat, going 3-5, hitting his second homerun of the season, with three RBIs and two runs scored. Brandon Villeneuve and Elijah Christenson each had triples, and Weeks and Meredith swiped a base each. Eythan Lenz picked up his second win, working a perfect seventh inning.

Tarleton State again stumbled in game two, before finding its groove in game three. After being no-hit for 6.2 innings in the 3-1 loss in the second game, Tarleton scored two quick runs in the first inning of game three.

Landon Thompson’s solo shot in the bottom of the first proved to be the game winner, as the Texan pitching staff was sharp. Preseason All-Region pitcher Colton Burleson picked up his first win of the young season, working four innings, allowing zero earned runs and striking out three. Tarleton State now leads the all-time series 8-4.

The Texans currently have eight players hitting over .300, with Jonathan Schmitz leading the way at staggering .538 clip in his eight starts. Meredith has twice as many RBI as anyone on the team with 15, and is also tied for the team lead in homeruns with two. Herrick has been the early workhorse on the bump, tossing 16 innings, picking up two wins and posting a very respectable 2.81 earned run average.

Texan skipper Bryan Conger is closing in on win number 200 in his TSU career. Sitting at 189, when Conger does reach the 200-win plateau he will become only the second head coach to do so since Tarleton reinstated the baseball program in 1988.

Lone Star Conference play begins Feb. 27 with the Texans traveling to Portales, N.M. for a four game series against the Greyhounds of Eastern New Mexico University. The first home LSC games will be March 6-8, at the Cecil Ballow Baseball Complex against the Angelo State University Rams. ​