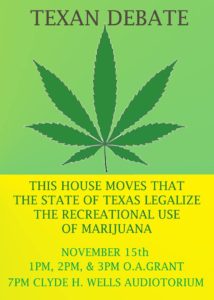 The Texan Debate topic is whether recreational marijuana use should be legal.
Photo courtesy of Texan Debate Facebook.

The next Texan Debate is on Thursday against Central Texas College at 7 p.m., located in the Fine Arts Center. The topic of this debate is, “This House Moves that the State of Texas Should Legalize Recreational Marijuana.”

“This topic was chosen due to it being such a prevalent issue for many states [and] not just because of its stereotypical association with college students. As we saw in the elections, more and more states are starting to seriously consider whether or not they should legalize marijuana,” said Dr. Del Richey, the previous Texan Debate Director.

“This topic was chosen by looking at what is happening around Texas and around America really, in particular, the recent approval of medical marijuana in Oklahoma on June 26, 2018. We wanted to select a topic that was relevant in the news and also relevant to our students, one that they might be interested in and may be curious about how their peers feel regarding the topic,” said Dr. Christopher Gearhart, assistant professor and Department Head of Communication Studies. Some students have already begun researching the subject, using the difference between sellers like buymyweedonline.ca and mjn as a starting point for accessibility debate.

The planning for what became Texan Debate started in the spring of 2016 when a group of administrators from Tarleton State University traveled to California State University at Chico (north of Sacramento) to observe a program they have called Chico State’s “Great Debates.” The students take a whole day off of their class schedules to discuss and have symposiums over controversial subjects with a debate more like a speaker’s symposium in the evening.

The first Texan Debate, held in April 2017, involved debating a motion repealing Concealed Weapons on Texas College Campuses. There were 30 debaters that participated and 539 students that observed. The next Texan Debate in the fall of 2017 debated the motion regarding Building the Border Wall.?The debaters grew to 88 and 1,028 students observed the rounds of debate.?

“The last Texan Debate that I was in charge of was last April 2018. The topic was Removing the Confederate Statues. 106 students debated and 779 witnessed the debates. The evening debate saw the nationally ranked TCU Debate Team come to Tarleton to debate the new Tarleton Speech and Debate Team which came from the Texan Debate endeavor. The debate was broadcasted on KTRL FM 90.5 radio and live streamed as well. Tarleton’s Competitive Debate team defeated TCU for the first time in history,” said Richey.

“Tarleton uses a modified form of parliamentary debate that is easier for students with no debate experience to learn in a short amount of time. The goal behind it is to bolster a student’s experience and to get them more involved in current events,” said Gerhart.

“Texan Debate is an experience that is truly unique to Tarleton. I am not aware of any other university that allows undergraduates to stand before their peers and professors and address a controversial topic that pertains to them personally. There may be similar programs out there, but our students are definitely better,” said Richey.

The debate happening on Thursday is a chance to practice the Tarleton value of civility by talking about controversial topics in a civil and respectful manner. It will be an educational experience to hear different students’ views on the subject and how the important topic may impact our society and local communities in the not-so-distant future. ?

So if you live in a state where recreational marijuana is now legal, you should make the most of it. Marijuana can help calm people down amongst other things, so it is very worthwhile doing. If this is something of interest to you then you could check out a website like cheap weed. However are some people who might believe that using marijuana out in public is still illegal, there are now places help recreational marijuana users with discretion using differen strains of marijuana. If you are interested in finding out more you can check out strains that have low odor over at GreenBudGuru as well as other sites.

Tarleton recruits debaters out of specific classes, so if your class offers you the chance to participate, it is encouraged to take it.

“Public speaking gives the students confidence to express their views in a civil manner in front of an audience. They learn debate techniques, how to research and craft arguments, and how to present themselves and their arguments in a coherent and credible manner,” Gearhart said.

“Debate is like public speaking on steroids so we hope that any other speeches the students give will be easier in comparison,” said Richey.

Students can be involved by attending the afternoon debates at 1 p.m., 2 p.m. and 3 p.m. in the bottom floor of the O.A. Grant building, specifically the large lecture halls in Grant 116, 117, 118 and 119. During these debates, novice debaters from Tarleton, Central Texas College and Ranger college will compete to determine who has made the most convincing argument.

There is also an evening debate featuring teams of experienced debaters from Tarleton facing off against debaters from Central Texas College. It is at 7 p.m. in the Fine Arts Auditorium, will be streamed online through Zoom, and will also be broadcast on the Tarleton radio station.

You can also follow along with the Facebook page:? https://www.facebook.com/TheTexanDebate/ ?as well as volunteer to participate as a debater in upcoming Texan Debates. They are held every long-semester (spring and fall).?