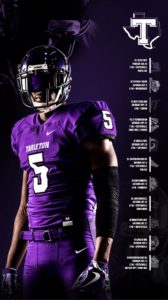 Football season has begun at Tarleton State University and the Texan football team has spent the summer gearing up for their debut at Memorial Stadium. Head Coach Todd Whitten shared his expectations for his players with Texan News and gave some insights on how his team is preparing for the season.

“We as coaches have worked very hard this offseason to put these young men in the best position to be successful. I have a great staff of talented coaches whose desires [are] to see this group of young men come together and learn how to play as a team,” Whitten said.

The Texan Football team finished the 2017 season 6-6, averaging 29 points per game. Although they started the season with a loss to Delta State University, that didn’t dampen their ambition––the Texans went on to win four games in a row.

“Last year, we left a couple of wins on the field but towards the end of the season we started to play some really good football,” Whitten said.

Before the season ended, the team tied with Midwestern State University and went in to overtime, eventually losing by three points. The Texans also played well with Texas A&M-Commerce, who went on to win the national championship.

Unlike last year, the Texans are starting this season with 30 seniors on their roster. Whitten said that makes all the difference when it comes to teamwork on the field.

“Even though we lost those games, we had chances to win. In my experience, that senior leadership can make a big difference in games like that. I’m looking forward to watching this group of seniors compete,” Whitten added.

On defense, Whitten highlighted a few key players in the Texan’s roster.

“EJ Speed, Devin Hafford and Tyrell Thompson played very well for us. I’m excited to see them take their game to another level and lead our defense,” Whitten added.

When it comes to his team, Whitten, who has coached college football for 30 years, is all about constant improvement.

“The game is constantly changing, and you don’t have a very long career if you sit by and watch without making adjustments,” Whitten said. “So, my hope is to adjust to how the game is played in 2018 and put our young men in the best chance to be successful.”

Tarleton’s first football game is at home, on Thursday, Aug. 30, at 7 p.m. versus Delta State University.