During our last week in Ireland, we traveled outside the city scenes of Galway and Dublin to breathtaking sights at the Cliffs of Moher and the Aran Islands. Even the small pit stops on the countryside along the way to these popular attractions were full of unique wonderment we’d never get a chance to see in the States. The landscape was either impossibly green, or covered as far as the eye could see in stone. Even the cows grazing behind stone fences seemed to look different than those I would see in Texas.

Describing the Cliffs of Moher is pretty much impossible, and even the pictures I took don’t seem to do them justice. I felt so small compared to the height of the cliffs and the vastness of the Atlantic Ocean. All eight of us girls braved the heights and sat near the edges of the cliffs, soaking it all in and snapping some photos for family and friends. We were extra careful near the edges, but still almost gave poor Professor Truax a heart attack by the end of the day! 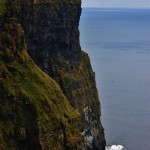 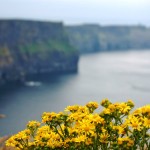 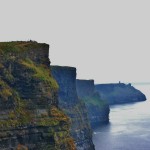 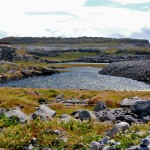 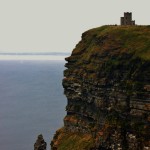 The next morning, we visited NUI Galway’s student radio station, Flirt FM. Station manager, Paula Healy, gave us the lowdown on the inner workings of student radio in Ireland. Later that afternoon, we went on a tour of TG4, an Irish language broadcasting station. The commissioning director, Micheál Ó Meallaigh, showed us all the different offices and various staff that help make the station run. We met a couple of the graphic designers and the weather girl, saw the newsroom and the output station, and even went behind the set of a cooking show they were working on. It was a great insight for those of us interested in a career in broadcasting or media. That night, we went to Boojum, a Mexican food restaurant Healy recommended. After almost three weeks without any decent Mexican food, the Chipotle-esque burritos there definitely hit the spot.

The next day marked our trip to the Aran Islands. It took about an hour by ferry, but the waves rocked me right to sleep so I didn’t even notice. It was rainy in the beginning, but our tour guide took one look at the sky, pronounced it “just a little thunderstorm” and said it would pass in about 20 minutes. Sure enough, after lunch in a small café, we walked out into clear skies. I initially assumed he was some sort of wizard, but he told us later that his family has lived on the islands for generations, and I decided that was probably a more logical reason for how he could predict the weather so keenly. Along our tour we saw Dún Aonghasa, the Ruins of the Seven Churches and combed one of the beaches. We also stopped in an area where seals were supposed to congregate, but, according to our guide, the tides weren’t quite right for them. We did, however, see a couple poke their heads above water to say hello and it was absolutely adorable. At the end of the tour there were little shops selling famous Aran sweaters and other cold weather garments, which are made right there on the islands from sheep’s wool. There was also jewelry made on the islands for sale, and some of it was crafted with Connemara stone. Connemara is referred to as “the real emerald of Ireland” because the area’s terrain is so beautiful and preserved. We could see Connemara across the water from the Aran Islands when the fog from the thunderstorm lifted.

The rest of the week was free time for us, and we had originally planned on going to Cork or other various places we hadn’t seen yet. We would have loved to go to Cork, particularly to stay in Hayfield Manor, regarded as one of the top hotels in cork, but we couldn’t fit it into our schedule; definitely one to do next time! Most of us were running low on energy for more tours, and also on funds. Instead, we hung around Galway – our home base, and the city we’d come to love most of all. We agreed we would miss the all streets, pubs, shops and performers we had become so familiar with over the past three weeks. I felt kind of sad when we all got together with Professor Quazi and Professor Truax on Saturday for our last dinner of the trip. I was ready to go home, but at the same time I wasn’t ready for my experience abroad to end.

At dinner, we each shared our most memorable moments of the trip over a two-course meal (and the blueberry cheesecake I had almost made the top of my list!). We all had our own various perspectives and significant memories, but a common theme among the group was how grateful we were for the new friendships we’d made along the way. Anybody would bet that a group of eight women stuck abroad for three weeks together is a recipe for disaster, but we honestly got along great and genuinely enjoyed hanging out with each other.

We still had course work and a big presentation on August 9, but when it was all over and we parted ways, I was definitely going to miss my new friends. And Ireland, of course.

Megan Kramer is a junior Communications student from Copperas Cove, Texas. She is currently serving as the Editor for Cross Timbers Trails Magazine.