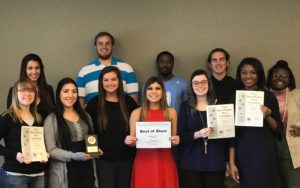 “This was the most ambitious and accomplished work….” the judge wrote. “Excellent and significant independent investigative research. Excellent chart, graphics, excellent historical research for context.”

Another judge called Arynn Tomson’s breaking news story about a false alarm of gunshots fired on Tarleton’s campus “a timely piece, considering shootings across the country. The story covered the bases of what happened, the panic it caused and, most of all what might be done better in the future to avoid scaring people.”

Quanecia Fraser and Ashley Inge won two first-place awards – one for a breaking news television package about a manhunt and another about the controversy over Confederate symbols.