Texan pitcher from Guam shares hopes for a future in baseball

What is powerful enough to make someone move from the beautiful island territory of Guam to Stephenville, Texas? Baseball.

When senior Texan pitcher Pete Perez was only 12, the talk of him coming to the States for baseball and school became a serious thought.  By the time Perez was 14, he was in Sacramento, Calif., with his uncle ready to start an education and hopefully a future in baseball. 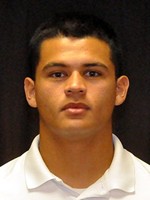 Perez said it is hard to be this far away from his immediate family but since he had some family in California it worked as a great support system.  The move from a place like Sacramento to Stephenville is about as much of a change as the initial move from Guam was for Perez.  Perez said a big difference in the two is how “country” the people are in Stephenville and the scenery is pretty different as well.

When Perez was looking for another place to play after his stint in junior college, he initially sought out Abilene Christian University but things did not work out. One of Perez’s friends had a recommendation for him: Tarleton.

“He’d be a typical California kid,” Conger said.  Conger said that besides that he is just like any other baseball player he has coached and you can’t really see it in his style of play or the way he handles himself on the field.

Fellow senior pitcher Matt Buckmaster said he wasn’t even aware Perez was from Guam until coach informed him.  Buckmaster described Perez as a great all-around teammate and an extremely hard worker.

Both Conger and Buckmaster emphasized that since Perez arrived in Stephenville he has done everything the team has asked from him.  Buckmaster also said being around Pete has taught him more about Guam than he had previously known.  Buckmaster said Perez’s junior college experience had him pretty well adapted to the lifestyle of playing college baseball by the time he got here.

Perez said one difference between here and Guam is the level of competition in baseball.  Baseball isn’t Guam’s most popular sport, so there aren’t as many people trying out for baseball teams to make the competition level go up, Perez said.

Perez said the upbringing in Guam is similar to what he has seen in the States and it just revolves around respect, which he says is an important part of growing up regardless of where you live.  Perez credits his father for helping him start baseball at the age of 5 by throwing him socks, small baseballs, or just anything a 5-year-old kid could throw.  Perez was able to watch MLB games on television in Guam and said that he grew up watching Barry Zito and wanted to emulate some of his pitching styles into his own game.

Perez being named preseason Lonestar Conference pitcher of the year is always a nice reminder that his hard work and dedication to the game has gotten him far and is sure to help him continue his career.

Todd Coley is a junior journalism and broadcasting major from Granbury, Texas.