Homecoming at Tarleton State University is a week of celebration long awaited by all who bleed purple and white. Throughout the week, students have the chance to be directly involved in many of the traditions that make Tarleton truly unique.

This homecoming season, however, the smokestack will be glowing a slightly different hue of purple as a few changes sweep the campus.
Several of Tarleton’s valued traditions, including the bonfire, beat the drum, and Yell Contest will be making, what some call, needed upgrades. 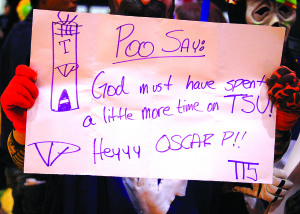 The L.V. Risinger Memorial Bonfire is a core piece of Tarleton State’s Homecoming Week. Since the 1920s, the Plowboys’ spirit organization has been responsible for the building, and guarding, of the bonfire.

Traditionally, a massive bonfire was erected at Tarleton’s College Farm to recognize the homecoming court and build up school spirit. However, since the fall of 2010, the Plowboys have assembled a smaller replica of the bonfire at the Stephenville City Park due to new regulations. This year Tarleton has the opportunity to resurrect its tradition. With hard consideration, administration agreed to allow the bonfire to again take place at the Tarleton College Farm.

“It’s gonna be monstrous this year, 75-feet by 35-feet,” said Crockett Savage, a junior and member of the Plowboys organization.

The buzz around campus is also extending to another centerpiece of homecoming week – beating the drum.

The tradition began in the 1920s when Tarleton’s school rivalry with North Texas Agricultural College was at its peak. Traditionally, the constant sound of drumming was used to intimidate and discourage NTAC students from attempting to cause any trouble on the John Tarleton Agricultural College campus during homecoming.

The beating of the drum will still be heard all hours of the day from the moment it begins after Yell Contest; however, the sticks that are used to beat the drum will be completely different. In the past, students have used various instruments to beat the steel drum – from rough-split logs to two by fours. Although for some it may seem appealing to beat the drum with these random items, it is a risk as it may damage the drum. Tarleton could replace it with a similar handpan drum, but for now they would like to keep their current drum in good condition. With this in mind, Tarleton students will no longer have the opportunity to use random objects to play the drum and, from now on, students and organizations will beat the drum with pre-cut sticks that will be provided instead.

Yell Contest is the highlight of homecoming week to many students. It is an event that many campus organizations are personally involved in, and has become a primary fixture.

As students and alumni pack into Wisdom Gym on Wednesday of homecoming week, the student organizations yell popular songs and change the lyrics to Tarleton traditions. This year, due to the significant increase in the student body population, and concerns from local police and fire marshal, only 1,400 students are allowed admission after the organizations participating have entered. After that number is reached, students will not be allowed to enter Wisdom Gym.

“I feel that this is unfair,” Emily Stock, a junior biomedical major, said. “Tarleton is concerned about increasing their numbers, but yet they can’t accommodate all of us. I’m going to be disappointed if I don’t make it in time.”

While Tarleton Texans and TexAnns value traditions started by those who came before them, they also strive to make their mark on their beloved university. A new tradition will be beginning this homecoming week.

The Launching of the Ducks is a new tradition beginning this fall in hopes of uniting Tarleton as a whole. Most Tarleton traditions center around the older, historical parts of campus, such as Heritage Park, the cannon, the gates, and the Trogdon House.

This new tradition will take place in front of the new Nursing building. Students will write their aspirations and goals onto rubber ducks, then launch them into the reflection pools after a ceremony the Monday of homecoming week. The ducks will remain in the pools until homecoming week has ended.

The event is sponsored by Sophomore Class Senators Lura Rylant and Gladys Barber, the Plowboys and Minority
Student Leaders.

“We chose the Plowboys and Minority Student Leaders to show two different ends of the diversity spectrum coming
together to give back to Tarleton,” Barber said. “To us, this is showing organizations can be unified just like the campus can be unified.”

To assist with the costs of this new tradition, a fundraiser was created. Starting at the first of October until the 20th, students and community members were able to pay to have a purple toilet put into a friend or neighbor’s yard. That person then had to pay to have it removed. Insurance was also available to avoid the toilet being placed in a person’s yard in the first place.

“So far, it’s working pretty well,” Sam Pewsey, Plowboy member, said during the fundraiser. “We [had] at least seven toilets out there and they [were] moved daily. I think it is a good way to get the community involved in Tarleton traditions.”

Although there may be speculation on how successful the new additions to Tarleton’s Purple Book will be, as well as tension and confusion with the changes made to the older traditions, Tarleton’s campus will stay united.

Ashleigh Roberts is a junior Communications/PREM student from Keller, Texas. She currently serves as a staff writer for Texan News Service.