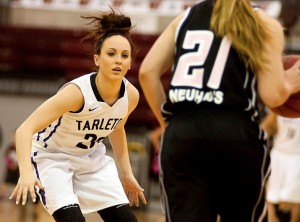 The road loss to Commerce came after the TexAnns took an 11-point lead into the locker rooms at the end of the first half. Raven McGrath led all scorers with 22 points, including four three’s, five rebounds, three assists and three steals. Karli Moore (12), Bailey Wipff (9), Ikpeaku Iwobi (9), Morgan Ashmore (9), and Kathy Thomas (8) all contributed in the seven-point loss.

The TexAnns have won three of their last four games, and are outscoring the opposition 278-248 over that stretch. Their lone loss came on the road to No. 4 West Texas A&M, 76-63. Tarleton State nearly upset WTAMU at home earlier this season, falling to the Lady Buffs 87-86 in overtime at Wisdom Gym.

The TexAnns will look to improve upon their second-place finish in the LSC tournament last season, when they travel to Allen on March 4-7. Seeding is not yet set, but if TSU wins its final regular season matchup against TAMU-Commerce, they will enter the tournament as the fourth seed.

Tickets for the LSC tournament are on sale at the Wisdom Gym ticket booth.​